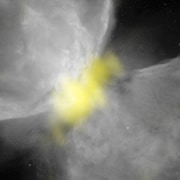 The Atacama Large Millimeter/sub-millimeter Array (ALMA) radio telescope in the Atacama desert of northern Chile has just opened a new window to the Universe, in the 500 GHz frequency band.

Astronomers have successfully imaged the distribution of atomic carbon around the planetary nebula NGC 6302 in test observations with the ALMA Band 8 receiver, developed by the National Astronomical Observatory of Japan (NAOJ). This is the first 500 GHz-band astronomical image captured by a radio interferometer, giving extremely high resolution and especially useful in detecting carbon.

NGC 6302 is a planetary nebula, which is in the final stage of the life of a star with a mass several times that of the Sun. Visible-light images of this nebula show a bipolar shape of gas ejected from the dying star. ALMA, using its Band 8 receivers, targeted the center of the nebula and revealed that the distribution of carbon atoms there is concentrated in a small part of the nebula, which is similar to a dust and gas disk around the central star that has been found by previous observations with other telescopes. Further observations of carbon atoms with better resolution will no doubt give a more detailed view of the chemical environment in the nebula.

So far, observations in the 500 GHz band, including emission line from cosmic carbon atoms, have been made with single-dish radio telescopes. The typical spatial resolution of those observations is 15 arcseconds or larger (1 arcsecond corresponds to 1/3600 of 1 degree). However, the ALMA array has already achieved nearly five times better resolution—3.5 arcseconds in this test observation. By installing the receiver in all of the 66 ALMA antennas, the resolution will become far better than this—by 400 times. Astronomers around the world have high expectations for future observations with Band 8 receivers.

Yutaro Sekimoto, an associate professor at NAOJ and the leader of the Band 8 receiver development team at the NAOJ’s advanced Technology Center, says, “I deeply appreciate the long and hard efforts of all staff to realize ALMA observation of the carbon atom. I expect that further ALMA observations will unveil the evolutionary process of interstellar matter.”

The Atacama Large Millimeter/sub-millimeter Array (ALMA) is an astronomical interferometer of radio telescopes in the Atacama Desert of northern Chile. Since a high and dry site is crucial to millimeter wavelength operations, the array has been constructed on the Chajnantor plateau at 16,500 feet altitude. Consisting of 66 12-meter and 7-meter radio telescopes, ALMA has been fully operational since March 2013. 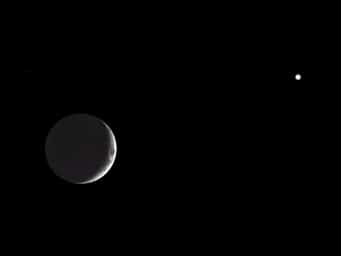 Soon after the Sun dips below the western horizon on Sunday, September 8th, anyone looking in that direction will see a dramatic sight: a pretty crescent Moon paired closely with the dazzling planet Venus, the “Evening Star.” Although the celestial duo might seem close together, Venus is actually more than 400 times farther away from us—100 million miles, compared to about 235,000 miles for the Moon.

When the sky darkens a bit, try also looking to the upper left of the Moon and Venus—by about the width of your fist at arm’s length—to spot the ringed planet Saturn. To the duo’s lower right, not quite as far away, is the star Spica in the constellation Virgo.