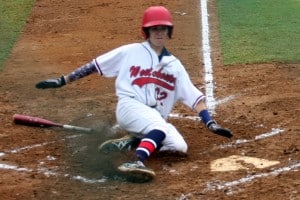 Westside Baseball’s Westchester Babe Ruth 13-15 All Stars took their record to 1-1 in the Babe Ruth World Series on Monday morning with a 5-2 win over the Midwest Plains representatives from Ottumwa, IA. The series is being played in Loudon County, Virginia, a suburb of Washington DC. The win keeps Westchester in the hunt to advance to the championship single elimination round that starts on Thursday.

Uly Perez (Santa Monica ’16) worked a complete game on the mound for the win. In 7 innings of work, he allowed 2 runs on 4 hits, no walks and 5 strike outs. He helped himself at the plate going 2 for 4 with an RBI and a run scored. For his efforts, Perez was awarded the player of the game award by the tournament committee.

Matthew Kanfer (LACES ’15) had a big day at the plate driving in 3 runs with a single and a double. Carlos Jacobo (Hawthorne ’17) had the sole remaining hit. Cameren Landreth (Westchester ’16) scored 2 runs in the win.

The Westchester side will face the undefeated Southwest Regional Champions, Brazoswood, TX, on Tuesday at 4PM Eastern.