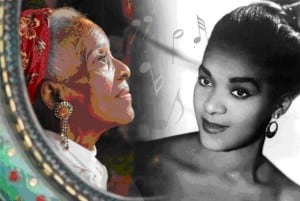 The Mayme Clatyon Library and Museum’s amazing  ‘Black Talkies On Parade Film Series’ will presents an Encore Afternoon with Hope Foye on Aug. 24 at 4 pm
Ms. Hope Foye will perform a few songs and discuss her role in the documentary:

Red Hope: The Blacklisting of Hope Foye (Her Story, Her Songs)

The MCLM Black Talkies On Parade Film Series presents an afternoon with Ms. Hope Foye, subject of the 2011 documentary Red Hope? The Blacklisting of Hope Foye (Her Story, Her Songs) directed by Constance Jackson and narrated by Keith David. The film explores the life of African American classical opera singer Hope Foye – her struggles for justice, survival and preservation of her music. A member of People’s Artists during the 1940s, Foye was friends with activists committed to social justice, including actor, Paul Robeson, folk singer, Pete Seeger, scholar, W.E.B. Du Bois, and his wife, playwright, Shirley Graham Du Bois. However, Foye’s budding career in America was derailed when she was subpoenaed to testify before the McCurran Committee (Senate Internal Security Subcommittee) and refused to answer the Committee’s questions regarding her supposedly “communist affiliations.”

This setback did not stop Ms. Foye who moved to Mexico and became the first popular African American singer on television in Mexico. She also garnered international acclaim performing classical opera in Europe and Israel.

The incomparable Hope Foye will perform three songs immediately following the screening. Join us this month as we welcome Ms. Hope Foye, a living legend, back to MCLM!