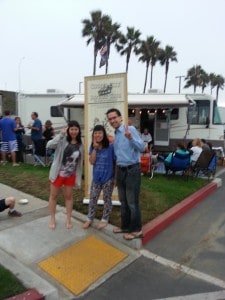 According to a quote frequently attributed to St. Augustine, “The world is a book, and those who do not travel read only a page.” That has a Rotarian ring to it because, thanks to Culver City Rotary’s Youth Exchange program with its sister club in Kaizuka, Japan, two teenage Japanese girls have now added a memorable and valuable page to their book of life experience.

But it took over a century to produce that particular page.

Its roots can be traced back to February 25, 1905, when the first meeting of what ultimately became Rotary International was held in Chicago by the four founding members. Then, 25 years later on February 24, 1930, the Culver City Rotary Club held its first meeting, eventually leading to its initial venture into Youth Exchange programs when it welcomed an exchange student from Japan at the onset of the ‘70s.

Culver City Rotary president Christopher King (pictured above with Kaizuka guests) explained that the local club has conducted Youth Exchange programs with its sister clubs in Japan and Australia for over 40 years, with the clubs trading off each year. ‘One year, Culver City Rotary sends two high school students to one of those countries for about a month during the summer,” he said. “The next year, the sister club selects two high school students and sends them here.

“The point of the program is to create goodwill and understanding between the clubs and between the countries. The ‘sending’ club selects the two students, usually based upon an essay on why they would like to participate in the program. When it’s our turn to send students, we look for the essay to demonstrate openness to a new culture, a desire to learn and a desire to be a goodwill ambassador for our country and for Culver City.”

The visiting students are hosted by Culver City Rotarians, with members taking turns either home-hosting or day-hosting. During this visit, three couples shared the home-hosting responsibilities: Linda and John Black, Janet and Jerry Chabola and Craig and Laura Ferre.

“For day-hosting, we ask the students to let us know ahead of time what activities they would like to do in LA,” King said. “Rotarians then sign up for days throughout the time that the students are here and show them everything LA has to offer. Hotspots include seeing the Hollywood Walk of Fame, Disneyland and Rodeo Drive. Other activities include showing the students the Jewelry District in downtown LA, going to Santa Barbara for beach days, going kayaking and visiting sights such as the Getty Center. Our club, having members from UCLA and USC, has a fun tradition of taking the students to each school and buying them school-specific T-shirts. We then compete and try to have the students wear either the UCLA or USC gear on the last day they are in LA before they fly home.”

Rotary was in full welcome mode when high school students Kotone Fujita and Akari Nasu arrived July 29 for a visit that was such a kaleidoscope of activities that they often fell asleep in the car on the way back after engaging in a flurry of fun and educational experiences planned by the Rotarians.

Dockweiler State Beach was the venue, Sunday evening, for a farewell barbeque party prior to the students’ departure on August 21. The Blacks, one of the home-host couples, had rented a prime spot in which to park their recently acquired motor home so that it could be used as “party central” for the event. The accompanying photograph shows the students and King in front of the banner at the site.

While munching on hot dogs and hamburgers, two of the home-hosts, Janet Chabola and Linda Black, shared their memories of this visit.

Chabola said that it was initially challenging because of language issues, with the students appearing very shy at first. She believes their hesitation to communicate in English was cultural because “they didn’t want to embarrass themselves. They read English very well. That’s Akari’s favorite subject, and the goal now is for both to become fluent in English. I would tell them to please just practice, because it’s so ingrained in them not to speak if they’re not going to say it right. However, there are many ways to communicate without English, and there was a lot of pointing. It wasn’t one of these ‘talk louder and they will understand better’ things. And they did speak more toward the end of their week with us. We have two children and six grandchildren so they got a lot of exposure to our family. They did a great job of observing, so they knew who to kid and fool around with.”

The immersion process was off and running.

Commenting that “they’re very adventurous, which makes them really fun to be with,” Chabola was impressed that “they tried any food we made for them. Jerry made pancakes for breakfast, which they really enjoyed. And they loved bagels with lox and cream cheese! The first day or two we let it slide and did everything for them and then they became ‘working’ family members. Jerry and I were hysterical when they made scrambled eggs with chopsticks, but the eggs were nice and fluffy. It was really cute, and they love to cook.”

Serendipity must have been at work, as Chabola mentioned that “people from Kaizuka were here the same time on an exchange through the Sister City Committee. There were several middle school kids, so we got them all together and the girls went to Disneyland, the Science Center and saw the space shuttle over the course of four days.”

She’s looking forward to January because “that’s when the Australians are coming. It’s their summer, so we’ll be doing it all over again. It’s a blast! There were kids here from Australia in 1991 and we’re still in touch. Facebook makes it so easy now.” Many students have maintained ties with the Rotarians and have visited again under their own auspices over the years.

Black thoroughly enjoyed hosting the students whom she found “sweet, kind and so appreciative.” She and her husband live in the Marina, which she described as “a great area for visitors. The girls really enjoyed the pool. They could easily walk over to the Barnes and Noble and enjoy the various shops at Glencoe and Maxella. They had a wonderful taste of LA and had so much fun.”

As a bonus, Black even learned how to prepare a Japanese dish.

“They taught me how to make this delicious meal with udon noodles and miso soup,” she said. “You should see the instructions they wrote out for me, and they even drew diagrams of how to do it. We had chipotle chicken with corn on the cob and udon. Now that is the definition of fusion!”

She smiled as she recalled going to El Torito and the wide variety and large amounts of food consumed. “They loved it,” she said. “They have very adventurous palates. They even mentioned that their clothes are getting tight and they’ll have to eat carefully for a few weeks after returning home.”

As warm smiles and heartfelt hugs were exchanged at the farewell party, it was apparent that, notwithstanding language challenges, both sides had developed strong fluency in friendship, with the affection and gratitude of the students coming through loud and clear.

“Our hope was to create goodwill ambassadors and to create future Rotarians who will continue Rotary’s mission of service,” King said. “Because Rotary has an International Foundation, when clubs partner on projects they are able to utilize funds from the International Foundation to do great work in our local communities. This exchange program deepens the relationship among our clubs and makes partnerships like this all the more possible.”

The students are now setting off on the next step of their journey by returning to Japan where, enriched and enlightened by the experiences provided through Culver City Rotary, they can now personify and communicate the hope expressed by King.