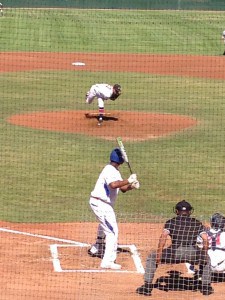 It’s amazing what a little rest can do for a baseball team. After a long flight and even longer bus ride, Westside Baseball’s Westchester Babe Ruth 14U team struggled to a 7-1 victory in the opening game of the World Series on Saturday. On Sunday, the Westchester bats woke up, pounding out 14 hits against an overmatched New Hampshire All Star team, winning that game 11-7. On Monday, Westchester faced the previously undefeated State of Florida champion in a game to determine the number one seed in the single elimination playoffs beginning on Thursday. The game was no contest as Westchester cruised to an easy 15-10 victory.

Westchester rudely greeted Florida starter Cole Blochowski with seven first inning hits, knocking Blochowski from the game after he recorded just two outs. Justin Morris got things started as he got hit by a pitch for the third time in the World Series. Kelvin Murillo and Aaron Greenfield each singled, and Nolan Martinez tripled giving Westchester a 3-0 lead. Saul Martinez reached base on an error and Derek Marshall ( see photo) singled to center. After a Dylan Sledge fielder’s choice, Jonathan Phelps singled, Morris tripled and Murillo singled, giving Westchester an 8-0 first inning lead.

Westchester starting pitcher Derek Marshall cruised through the first two scoreless innings, but gave up two runs in the top of the third, narrowing Westchester’s lead to 8-2. Westchester countered in the bottom of the third with four runs on a Phelps walk, Dailin Lee singles, singles by Murillo, Greenfield and Marshall, and an error on a Martinez grounder led to the four runs.

Florida came back for seven in the top of the fourth inning on eight hits, but Marshall pitched his way through, and kept Westchester in the game with a 12-9 lead. After Florida scored one in the top of the fifth, Westchester answered back with three in the bottom of the sixth on singles by Saul Martinez, Phelps, Lee and Morris’ second triple of the game. Marshall held onto the 15-10 victory, pitching a scoreless seventh inning.

Morris and Murillo continued to lead the Westchester offense, garnering five hits, scoring four runs, and knocking in five between them. Greenfield, Phelps and Lee each got two hits, and pitcher Marshall went three for three. Lee, who is having an incredible series at the plate, put things into perspective, “We’ve scored a lot of runs (34 in three games) but we can’t expect teams to roll over. We have to keep working hard and we’ve got to keep executing. Our coaching staff has done a great job of getting us prepared and keeping us balanced.”

Westchester improved to 3-0 and clinched the number one seed in the American Division. Westchester will play Washington on Wednesday, and then begins single elimination play on Friday. A victory on Friday will put Westchester in the World Series finals on Saturday.