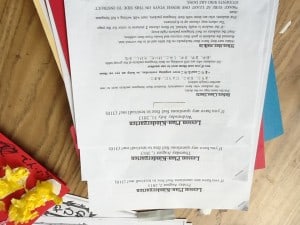 Describing our Pre-K/1st grade Japanese Immersion Summer Program at Culver City Adult School, I said recently that we are a cycle: we learn, we teach, we teach others how to teach, we create an environment where learning and teaching can happen. It’s as simple as that. Actually, I believe this is what the big word “Education” is really about.

My first boss in the teaching profession said to me, “you have to love the kids,” which is a mantra I also often repeat. A teacher’s job can also be boiled down to: keep ’em safe, teach ’em something, offer some enjoyment. This is especially the case in our summer enrichment program at Culver City Adult School. I would like to share what we do in my combined Pre-K and 1st grade Japanese Immersion class as a case study or model of what I feel can be an ideal educational system.

I’ll talk a little about how we started, speak to what we look like now, and finish with a recipe for how this can really be done anywhere, from camps, to religious schools, to businesses, to start-up schools a.k.a. charter and magnet schools.

My eldest son attended Culver City Adult School’s Pre-K/1st grade Japanese Immersion class during the summer of 1999, just prior to his eventual matriculation in the Japanese Language Track of El Marino’s Language Immersion School. At the time, we lived in Mar Vista, and my sons would a actually have had the opportunity to go to the very elementary school that I’d attended myself. But the enrichment possibilities that I felt a bilingual immersion school might afford outweighed tradition.

The following summer, as a way for my son and his classmates to keep up their Japanese language skills over the summer, I wanted to enroll him again in the class, but, the teacher had decided not to teach it any more. None of the Japanese teachers in the district wanted to teach it either. In those Wild West days of the Adult School, I somehow obtained approval for use of a classroom on one of the campuses, and managed to get a person who was really just a native Japanese speaker to teach the class, based on a curriculum of which I…somehow…made up. In any case, the kids were safe, and had a good time.

The following year, us parents working together managed to find a “real” Japanese teacher. This time, she was not only a native speaker, but also an art teacher (still not a Japanese language teacher per se). The class was offered in the Culver City Adult School brochure, along with their other summer offerings. We worked together on a curriculum that lasted a few years; at least until my second son came along and took her class. By then I had decided to change careers. Formerly an executive in the travel industry, all of this dabbling in education sent me back to school, after more than 20 years, for a Master’s Degree and Teaching Credentials. I tried my hand at teaching a 3rd-5th grade Japanese class (with my oldest son in it), while my younger son had his Pre-K class. The following year, I took over the Pre-K class, and have been teaching it since that time, for the past ten years.

There had been a tradition to have parents sign up as helpers for these pre-K summer classes, where we’d have about twenty 4-5 year olds, some straight out of the home, into their first school environment. In Japan, parents are expected to do their part in the schools, just as families are sometimes expected to fill in services for their loved ones at hospitals. I think this team effort kind of concept exists at El Marino, and has spread to the Spanish Immersion they have there, and, more recently, to other schools. I became interested in the goings on in a classroom from my wn volunteer experiences.

Once I began to teach, however, a few high school students stepped forward to help in the classroom. One particular student was working on her Girl Scout projects, and needed to work in a classroom. She eventually brought siblings and friends. Then I got my current job teaching at Culver City Middle School, and I began to recruit for helpers amongst my middle school students and students in our middle and high school Japanese programs.

Now we have created a new tradition. When I say “we,” I mean that I am fully responsible for the class, however, my middle and high school students (and sometimes college students, too) have created a learning community in the truest sense of what a learning community is. We’ve been through many permutations of the class, what with sometimes changing venues and several different administrators in the past ten years, but our class has endured and thrives to this day.

This summer, our Pre-K/1st grade Japanese Immersion class was 32 students total, with an average of 16 “helpers” or “Teacher’s Assistants:” a ratio of one TA for every two students. I recruited three new Japanese speakers and three other Japanophiles from my 7th grade English classes. We have a network of students coaching students, a room of people from the ages of 4 to 20. Everybody learns together, and from each other. The middle and high schools students created crafts and lessons, produced mini-plays, and possessed fresh intuition about behavior. They devised fun recess games, and genuinely cared for and about the children in a most refreshing and natural way.

For our first grade class, we did Japanese writing on Mondays, numbers to 100 in Japanese on Tuesdays, mini Science lessons (like, how do fish breathe) on Wednesdays, Japanese culture day on Thursdays (tea ceremony, summer gift giving, woodblock prints, folk dancing, etc.) and “electives” on Fridays. The electives were five centers, all designed to use Japanese skills: language games, math games, a Japanese food-related craft, making “Oobleck,” and, even, basketball skills.

In a fee-based enrichment program, the sign up process is necessarily different than during a regular school year, so you sometimes don’t find out the levels of your students until shortly before class is to begin. When we realized that, this year, we had a bumper crop of 1st graders (about a third of the class returnees from taking pre-K with us the year prior), we had to create a new curriculum days before class began, and we tweaked it as necessary after daily and weekly reflections.

The most significant thing about this class is, however, our “it takes a village…” approach. How do you get a room full of 4-20 year-olds to work together enriching each other’s lives beyond all imagination? You act as a facilitator. You don’t teach, you lead. You throw out ideas, you discuss goals that should be reached. You provide materials, space, and the freedom to make decisions. You are on hand to deal with special cases of behavior or learning styles. You make it your number one priority to keep everyone safe. You are in charge of interpersonal communication within the room, and with the outside world, including other colleagues, administration, and other campus staff. You are able to step in when things are not working, and re-direct the processes. You allow your (service learning) workforce to introduce their friends who they think might enjoy the work. Although I enlist new students every year as trainees, my previous recruits have introduced creative, gifted artists and caregivers to our “community.”

In the accompanying photo to this article, you will see a “lesson plan” pictured. This lesson plan was created by a 17-year old who has been with us for 5 summers. She was trained by the 20 year old who’s been with us for 10 summers. Our 17-year old left this lesson plan for the last three days of class, because she was going to be out of town. A team of five or six 14 year olds then led the class in her place, according to the lesson plan. The 20-year old, who created the curriculum for both classes this summer and leads our crew of 16 middle and high school students (ages 12-17) filled in for the first grade half of our class in place of our native-speaking 16 year-old who had the opportunity to go to Japan for the latter part of the summer. One of the student helpers is such a talented graphic artist, that I end up using 7th grade level versions of some of the crafts she’s made for the past couple of years in my regular school year Language Arts class.

There’s no “conclusion” to this article because, hopefully, there will be no conclusion. This class could possibly endure forever, with the support and nurturing we have fortunately been receiving from our administration in recent years. Some of our lead students are hoping to get certified as aides, and even go on for teaching credentials, so that they will eventually be able to take over this class and/or expand the program. We call this a “summer enrichment” program, and, as we sent off yet another successful program this August, we all left feeling enriched.