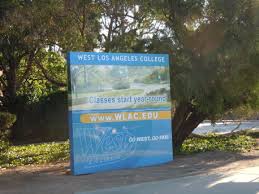 West Los Angeles College will initiate two new construction projects this summer under the Los Angeles Community College District bond construction program. The first is a campus-wide stormwater management system designed to return water to the local groundwater table. The second is stabilizing slopes on the east side of College Boulevard, the road that connects the college to Jefferson. This effort begins August 5. Construction on both projects is expected to be completed by the end of September 2013.

“The stormwater project is particularly noteworthy,” said college president Nabil Abu-Ghazaleh. “This green project will capture 85 percent of the college’s stormwater runoff which minimizes the runoff into local storm drains that flow to the ocean.”

The stormwater project features the construction of a retention basin on the soccer field. The basin will be created by the shallow excavation and re-grading of the field and the adjacent baseball diamond to create an area which will retain the water until it percolates back through the soil into the water table. This process is designed to take no more than a day. The college and community will still be able to use the area as a soccer field most of the year when storm water retention is not required, with the exception of the two month period after construction which will allow for the growth of new turf.

“The impact to the campus and surrounding area on this project will be minimal as there will be no export or import of soil,” explained Stephen Sharr, West’s contracted construction manager. He added that only a few pieces of construction equipment and small amounts construction materials will be required.

The slope stabilization project is needed to prevent potential earth-slides during earthquakes. The work will require the excavation and export of local soils and the import of more stable soils which meet engineering standards. Most of the soil replacement will occur prior to the start of classes on August 26.

Project work will be scheduled around college operations. During peak traffic periods on College Boulevard, construction traffic will be curtailed.

“We are requiring our contractors to take all steps necessary to mitigate dust, construction dirt on the streets, and construction noise,” added Abu-Ghazaleh.