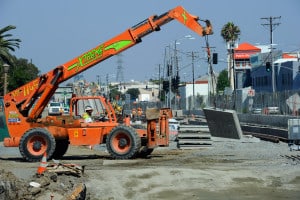 A bid by Westside homeowners’ groups to halt construction of the second phase of the Expo Line light rail from Culver City to Santa Monica has been rejected by the state Supreme Court, who ruled that the environmental impact report on the project was sufficient.

The 6 to 1 ruling, according to CBS News, clears the way for construction of the $1.5 billion project to proceed. The 6.6-mile extension of the rail line is expected to be completed sometime in late 2015.

“We are gratified that the California Supreme Court has affirmed the lower court rulings,” Expo Construction Authority CEO Rick Thorpe said. “Today’s decision is a win for taxpayers and the future riders who will soon benefit from a direct connection between downtown Los Angeles and Santa Monica. We remain focused on finishing the Expo Lien on time and on budget in 2015.”

Eight bridges along the route are already under construction.

The ruling is doubtless a frustrating one for Neighbors for Smart Rail, which has exhausted it’s legal options. According to Streetsblog, the Supreme Court agreed with their contention that the Expo Construction Authority should have used baseline traffic conditions, not projected future conditions, in its traffic study. However, it also ruled that there was “no prejudice” in the decision to use future conditions and the study provided enough information for the proposed rail line’s environmental documents to be approved.

“Although we conclude the EIR fails to satisfy CEQA‟s requirements in the first respect claimed, we also conclude the agency‟s abuse of discretion was nonprejudicial. Under the particular facts of this case, the agency‟s examination of certain environmental impacts only on projected year 2030 conditions, and not on existing environmental conditions, did not deprive the agency or the public of substantial relevant information on those impacts. (Environmental Protection Information Center v. California Dept. of Forestry & Fire Protection (2008) 44 Cal.4th 459, 485-486.) We will therefore affirm the judgment of the Court of Appeal, which affirmed the superior court‟s denial of Neighbors‟s petition for writ of mandate.”

Expo Phase II is an eight mile extension of the Expo Line from its current terminus in Culver City to near the 3rd Street Promenade in Santa Monica.

With the last legal dispute seemingly settled, backers of the Expo Line are hoping that both sides of the issue can now come together to make Expo the best light rail it can be.

“I am hopeful now all parties can work cooperatively to find fair ways to mitigate reasonable concerns regarding construction impacts and enhance station design, the bike path, and other remaining issues,” writes Dana Gabbard, a Board Member for the Southern California Transit Advocates.