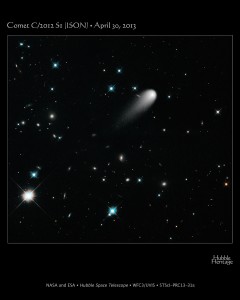 Comet ISON may put on quite a show when it skims through the sun’s atmosphere later this year. Right now, it’s too far away to tell, but we’re tracking it and will give you regular updates. Here are some key facts about ISON as we await its arrival:

Comet ISON was discovered by Russian astronomers Vitali Nevski and Artyom Novichonok in September 2012. It’s named after their night-sky survey program, the International Scientific Optical Network (ISON), consisting of a group of observatories in 10 countries organized to track objects in space.

Measurements taken by the Hubble Space Telescope in April 2013 indicate ISON has a nucleus that is 3 to 4 miles across. The comet’s head, or coma, is estimated to be 3,100 miles across, or 1.2 times the width of Australia. The Hubble team says its dust tail actually extends more than 57,000 miles—more than twice the circumference of Earth, and far beyond the Hubble telescope’s field of view.

Some early comet prognosticators have tagged ISON “the comet of the century.”

According to Dennis Bodewits, an astronomer at University of Maryland at College Park, “Comet ISON has the potential to be among the brightest comets of the last 50 years.”
Bodewits and other astronomers used NASA’s Swift satellite to estimate ISON’s water and dust production.

“Comet ISON belongs to a class of comets called Sungrazing comets,” Karl Battams of the Naval Research Lab told CNN. This means it will fly relatively close to our sun. These comets “teach us not only about comets, but also yield valuable and unique results about the sun,” he said.

But before you get too excited, other experts caution that it’s too early to know what ISON will do.

In November, ISON is expected to fly through the sun’s atmosphere at about 700,000 miles above the surface. If it survives the sun’s heat, experts say it might glow as brightly as the moon and be briefly visible in daylight. Its tail might stretch far across the night sky. Or the sun could simply cause it to break apart.

Welcome to the Year of the Comet (we hope).

GALAXIES, COMETS, AND STARS! OH MY!

In a composite image taken with the Hubble Space Telescope’s Wide Field Camera 3 on April 30, 2013, Comet ISON floats against a seemingly infinite backdrop of numerous galaxies and a handful of foreground stars. The icy visitor, with its long gossamer tail, appears to be swimming like a tadpole through a deep pond of celestial wonders.

In reality, the comet is much, much closer to us than its background of stars and galaxies. The nearest star to the Sun is over 60,000 times farther away, and the nearest large galaxy beyond the Milky Way is over thirty billion times more distant. These vast dimensions are lost in this deep-space Hubble exposure, which visually combines our view of the universe from the very nearby to the extraordinarily far away.
Image credit: NASA, ESA, and the Hubble Heritage Team (STScI/AURA)