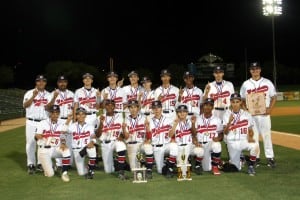 This year’s matchup contained all of the expected drama of a final rubber match and required extra innings to settle the affair. Westchester Manager, John Lopatto, sent Uly Perez to the mound to start the game for Westchester. Tri-Valley jumped out to an early lead in the top of the first inning – taking advantage of three walks. Westchester bullpen ace, Reggie Castro, relived Perez in the second inning. Tri-Valley added an additional two runs in the top of the second to run the score to 3-0.

Westchester answered with two runs in the bottom of the second inning. Carlos Jacobo reached on a fielding error followed by consecutive singles by Grant Craddolph and Christian Amador to load the bases. Jacobo and Craddolph took advantage of a couple of Tri-Valley battery miscues; scoring on a wild pitch and passed ball respectively.

Tri-Valley added an additional run in the top of the fifth inning on a pair of doubles to make the score 4-2. Westchester battled back in the bottom half of the fifth to tie the game. Amador collected his second hit of the game and Castro drew a walk to set the table for the hot hitting Matthew Kanfer. Kanfer sent a ground ball single up the middle to score Amador. Castro was able to score on another Tri-Valley wild pitch to tie the game at 4-4.

Showing the heart of a champion, Tri-Valley stormed back into the lead by plating three in the top of the sixth inning on a walk and four hits. Westchester called on staff ace, Jay Sterner, to get them out of the sixth trailing by three runs.

Lawrence “LJ” Gilliam started the rally for Westchester in the bottom of the sixth with a double to right field. AJ Inatsugu laid down a perfect bunt for a base hit down the third base line. Gilliam was able to score on the play as the throw from the third baseman to first base sailed into the first base dugout. Jacobo singled up the middle to score Inatsugu to bring Westchester to within one. Craddolph stepped to plate and sent a towering fly ball double to the deep center field to score Jacobo and tie the game. Tri-Valley stiffened defensively to thwart the rally, leaving the game tied at 7 entering the seventh inning.

Sterner stayed on the mound for Westchester and pitched scoreless seventh and eighth innings. In the top of the eighth inning, Jacobo sent a screaming ground ball to shortstop to reach first base. Amador hit a come-backer to the pitcher leaving Jacobo stranded in a pickle between second and third base. Amador was able to move to second base on the play as Jacobo was retired in the rundown. With two outs, Uly Perez delivered a walk off ground ball up the middle to score Amador and win the game for Westchester.

With Amador sliding home, the Westchester side spilled over the dugout fence and mobbed Perez at the pitcher’s mound. During post game ceremonies, Westchester’s Matthew Kanfer and Jay Sterner were named to the All-Tournament Team. Jay Sterner was named Tournament MVP.