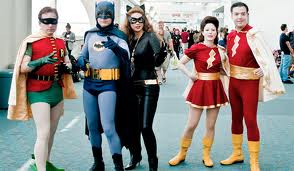 The Actors’ Gang, the critically acclaimed Los Angeles based ensemble theatre company, presents Twelfth Night: the Superhero Edition, adapted and directed by Co-Artistic Director, Cynthia Ettinger. This production, presented through The Actors’ Gang Free Family Shakespeare in the Park Program will open August 3 and run every Saturday and Sunday in August at 11am in Media Park (adjacent to the theater). Admission is free.

In this Actors’ Gang adaptation, Shakespeare’s Twelfth Night comes to life as your favorite superheroes play out the classic love triangles, disguises, and mistaken identities. Adapted and directed by Cynthia Ettinger, Twelfth Night: The Superhero Edition has big fun performances, music, dance and audience participation that delivers the timeless message of Twelfth Night, in this rollicking adaptation for children and adults alike.

Twelfth Night: The Superhero Edition is supported by a grant from The James Irvine Foundation.These performances are made possible in part by a Culver City Art in Public Places Program Performing Arts Grant with support from Sony Pictures Entertainment. This program receives additional support from The Annenberg Foundation, The Shubert Foundation, and the Los Angeles County Arts Commission.
About the Director, Cynthia Ettinger

Cynthia Ettinger is a founding member of The Actors’ Gang, and serves as the company’s Co-Artistic Director and lead trainer. She has performed in and directed numerous plays during the company’s 32-year history, including two recent Shakespeare adaptations (presented free of charge for families in the summer). Since 2006 she has also served as a teaching artist in the Education and Outreach programs. Film and TV credits include The Silence of the Lambs, Thirteen, “Carnivale,” “Grey’s Anatomy,” “Curb Your Enthusiasm,” “Deadwood,” “ER,” “Law & Order: Special Victims Unit,” and “Seinfeld.”

For 32 years, The Actors’ Gang has received international acclaim for presenting over 150 new, unconventional and uncompromising plays and dynamic reinterpretations of the classics in Los Angeles, throughout the United States, and on five continents. Guided by Founding Artistic Director, Tim Robbins, and Co-Artistic Director, Cynthia Ettinger, the company was founded in 1981 by a group of like minded artists looking to create theater relevant to the society we live in and restore the ancient sense of the stage as a shared sacred space.

The Actors’ Gang began touring its productions throughout the world in 1989, representing the US at the Edinburgh Festival with Carnage, a Comedy before moving to the Public Theater in New York.Since then the company has toured in Europe, Asia, Australia, Central and South America and throughout the US with productions such as 1984, The Trial of the Catonsville 9, The Guys, The Exonerated and Embedded. In 2004, The Actors’ Gang performed its anti Iraq war satire Embeddedto four months of sold-out houses at New York’s Public Theater and in 2001 Bat Boy: The Musical won the Lucille Lortel and Outer Critics awards for best new musical Off-Broadway.

Performances of Twelfth Night run Saturdays and Sundays at 11am in August.

Admission to Twelfth Night: The Superhero Edition is free.
The Actors’ Gang is located at the Ivy Substation at 9070 Venice Blvd. (near the intersection of Culver and Venice Blvds.) in Culver City. Two hours free parking is available throughout downtown Culver City; the Ince Parking Lot (corner of Culver and Ince) is directly across the street from the theater. Several restaurants are only a few blocks’ walk from The Actors’ Gang and offer a variety of dining options before and after the theater. Show your ticket stub at Akasha, Kay N’ Dave’s, Rush Street, La Rocco’s Pizzeria, The Culver Hotel, Bottle Rock and City Tavern to receive 10% off your meal. Show your ticket stub at Ugo Café to receive a free gelato.