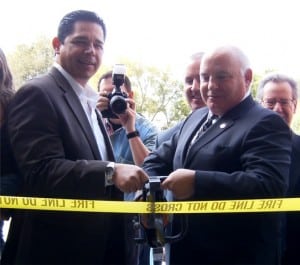 Former Mayor of Culver City, Christopher Armenta (pictured here with Andy Weissman at a ribbon cutting in 2009)  is pleased to announce his candidacy for the State Assembly representing the 54th Assembly District. Armenta has been a resident of Culver City for over 35 years and has served the City of Culver City as the elected City Clerk, Mayor, and as a Councilmember for 10 consecutive years through 2012. Additionally, Armenta has worked for state and federal government agencies in the fields of accounting and auditing for over 28 years. He has held highly technical leadership positions as a Senior Auditor, Business Taxes Specialist, and in 2010 was appointed to the California Tax Credit Allocation Committee by then Speaker of the Assembly, Karen Bass. For the past 3 years, Armenta has also worked on legislation and policy initiatives as the Deputy Advisor to the Elected State Board of Equalization Chairman, Jerome E. Horton who is responsible for overseeing the annual collection of approximately $53 Billion in taxes and fees for the State of California. “I have lived most of my life in the 54th Assembly District and care about this community deeply. I am excited at the opportunity to use my many years of experience in helping our district residents and the State of California. My goals are to improve education, jobs, the economy, healthcare, the environment and public safety. I promise to support and work vigorously in achieving these goals,” said Armenta.
Culver City is geographically located in the middle of the 54th district which also includes the Crenshaw District, UCLA, Cheviot Hills, Mar Vista, the Fairfax District and parts of South Los Angeles. The 54th Assembly seat is projected to be open based on the current Assembly Member’s, success in the election for the 26th Senate District seat. Armenta can be reached at 310-384-1490 or by email at [email protected]