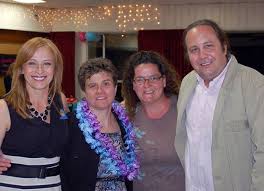 Current CCUSD School Board President Kathy Paspalis will be starting her run for re-election on July 13 at Mike Cohen’s house from 3 to 5 pm. Pictured here with Jeannine Wisnosky Stehlin, Heather Moses and Scott Kecken, Paspalis has been active throughout her term in the efforts to get parents involved in the process of creating district policy.

Paspalis won her first race in 2009 with a huge margin by campaigning tirelessly across the city and reaching out to voters in all categories. She was also a major force in the passage of the Measure EE property tax to keep Culver City schools from suffering in the wake of the huge budget cuts from Sacramento in 2010 and 2011.

Opening up what looks to be a very spirited campaign, she will be talking about her vision for the district and her plans to make that happen.