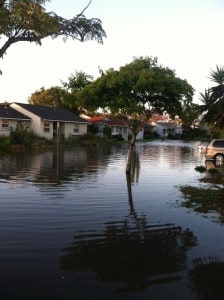 For the second time in three years, residents of McDonald and Woolford streets woke up to flooding. Water was still rising at 7 am, Public Works was already on the scene with the CC Fire Department; Golden State Water is said to be on the way.

With water almost four feet and still rising, residents have been hurried to pull cars out of the flood and help their neighbors.
(see video IMG_0272)

At 7:24 am the water was shut off, and the water levels began to decrease, just in time to keep the flood from overwhelming some front lawns and front porches.

CCFD opened a pump to divert the water out to Ballona Creek, and the street should begin to clear within the hour.

At 7:49 with water beginning to recede, Crossroads was able to wade over to Sawtelle and get a statement form Fire Department Captain Syversen ( see video IMG_0279)

According to Syversen, three breaks were pouring water to the street. Public Works is also busy getting the water cleared from the intersection.

Dan Nannini, one of  the people who went out knocking on doors to wake the neighborhood at 5:45 this morning, noted that it was the third flood for this end of McDonald. “More than ten years ago – I think it was 98 or 99 – we had a huge flood, and we learned. Just got to get these cars off the street before the engines get wet and they can’t be moved.”
Third Update – As of 3:45 pm, Golden State Water still did not have an estimate as to when service would be restored.Homes on Woolford, McDonald and and parts of Orville are without water indefinitely.

Fourth Update – At 5:20 pm water was back on, with crews still working in the neighborhood.