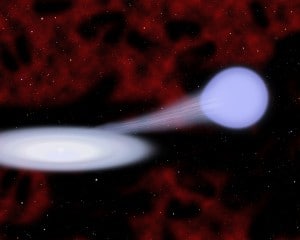 Plato, the Greek philosopher and mathematician, described music and astronomy as “sister sciences” that both encompass harmonious motions, whether of instrument strings or celestial objects. This philosophy of a “Music of the Spheres” was symbolic. However, modern technology is creating a true music of the spheres by transforming astronomical data into unique musical compositions.

Gerhard Sonnert, a research associate at the Harvard-Smithsonian Center for Astrophysics, has published a new website that allows listeners to literally hear the music of the stars. He worked with Wanda Diaz-Merced, a postdoctoral student at the University of Glasgow whose blindness led her into the field of sonification (turning astrophysical data into sound), and also with composer Volkmar Studtrucker, who turned the sound into music.

“I saw the musical notes on Wanda’s desk and I got inspired,” Sonnert says.

Diaz-Merced lost her sight in her early 20s while studying physics. When she visited an astronomy lab and heard the hiss of a signal from a radio telescope, she realized that she might be able to continue doing the science she loved. She now works with a program called xSonify, which allows users to present numerical data as sound and use pitch, volume, or rhythm to distinguish between different data values.

During a visit to the Center for Astrophysics in 2011, Diaz-Merced worked with data from NASA’s Chandra X-ray Observatory. The data was from EX Hydrae—a binary system in the constellation of Hydra, consisting of a normal star and a white dwarf. Known as a “cataclysmic variable,” the white dwarf fluctuates in X-ray brightness as it consumes gas from its companion star.

Diaz-Merced plugged the Chandra X-ray data into the xSonify program and converted the raw data into musical notes. The results sounded random, but Sonnert sensed that they could become something more pleasing to the ear. He contacted Studtrucker who chose short passages from the sonified notes, perhaps 70 bars in total, and added harmonies in different musical styles. Sound files that began as atonal compositions transformed into blues jams and jazz ballads, to name just two examples of the nine songs produced.

The project shows that something as far away and otherworldly as an X-ray-emitting cataclysmic variable binary star system can be significant to humans for two distinct reasons—one scientific and one artistic.

Sonnert explains that in creating music from stellar information, “We’re still extracting meaning from data, but in a very different way.”

The thought of “Music of the Spheres” goes back well over 2,000 years, to the time of Pythagoras. He proposed that the Sun, Moon and planets all emit their own unique “hum” (orbital resonance) based on their orbital revolution-periods, and that the quality of life on Earth reflects the tenor of celestial sounds which are physically imperceptible to the human ear. Subsequently, Plato described astronomy and music as “twinned” studies of sensual recognition: astronomy for the eyes, music for the ears, both requiring knowledge of numerical proportions to be appreciated.

You can listen to the results of Sonnert’s project at the Star Songs website:
www.cfa.harvard.edu/sed/projects/star_songs/