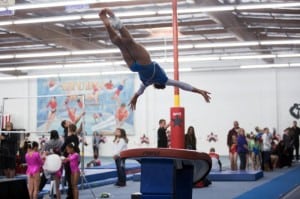 Bryanna Keith of Culver City, Level 7, won Gold on Vault at the California Classics in Aliso Viejo last March. At BGS’s Pacific Sun Classic in April, the Broadway Girls Level 4 Team took 1st Place and the Level 5 and 6 Teams both placed 2nd. At Brestyan’s Invitational last February BGS’s Level 9 Team won 2nd and the Level 10 and 8 Teams both took 3rd. In Addition to these amazing team accomplishments, the Level 9 Team also won Bronze at both Chris Waller’s Heart of a Champion Invite and the San Diego Classic Nastia Qualifier.