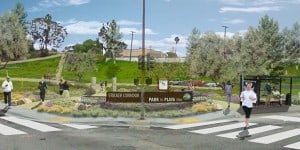 The Park to Playa project, which will eventually create a network of trails that will seamlessly connect Kenneth Hahn Park to the bike trails at Playa del Rey, continues to move forward.

On Tuesday, May 28 a regional board that oversees open space within the Baldwin Hills and Ballona Creek area will be asked to approve funding to enhance existing trails at Kenneth Hahn Regional Park. The Baldwin Hills Regional Conservation Authority is expected to approve $1.4 million to make needed connections between the trails to allow for a continuous link from La Cienega Boulevard to the five points intersection at Overhill Drive, La Brea Avenue and Stocker Street.

In order to comply with the California Environmental Quality Act, the board will also likely approve an environmental report that requires that the habitat be restored along the trail during the construction as well as a plan that will reduce emissions, noise and to ensure the protection of nesting birds.
The Park to Playa project will connect approximately 13 miles from the Baldwin Hills along Ballona Creek to the Ballona Wetlands and the beach bicycle path. The western portion of the Park to Playa Trail consists of the Ballona Creek Bike Path in Culver City and the Marvin Braude Bike Path in Playa del Rey, which are complete and are not part of the current project.

The eastern portion of the Park to Playa Trail would be an approximate 7-mile system of walking, hiking and bicycle trails running east and southeasterly through parks and open space areas in the Baldwin Hills.

In addition, the Mountains Recreation and Conservation Authority, a partner on the Park to Playa project, has already received a $1.03 million grant from the Baldwin Hills Conservancy to begin construction on the Stocker Corridor segment of the trail. Work on that segment is expected to begin this fall as well.