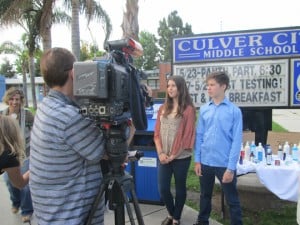 What goes where? Can that be recycled? What’s garbage and what’s gold? Recycle Across America and sponsoring company Kiehl’s started a program today at Culver City Middle School to donate more than 60,000 standardized recycling labels to more than 1,000 public schools in the Los Angeles area, including Culver City Unified School District and the Girl Scouts of Greater Los Angeles.

The labels, which depict the kind of recyclable materials that should go in each receptacle, will be used to alleviate confusion at the recycling bin and make recycling more efficient.

Fox television covered the event and will broadcast interviews with middle school students on today’s 5 p.m. newscast as well as on tomorrow’s Good Day L.A. program.

“Some students are really enthusiastic about recycling,” said Ali Gillett, an eighth-grader who heads up the school’s recycling committee. “But some are blind to what recycling is and how important it is to protecting the earth.”

Gillett said the standardized labels on the bins will help everyone to better understand what materials should go where.

“Right now, we have a lot of people who throw recyclables in the trash and vice versa,” she said.

Kiehl’s was founded as an old-world apothecary in New York’s East Village neighborhood and sells a variety of skin and hair products. The company is funding the recycling effort in celebration of the opening of its new Sherman Oaks store at Westfield Fashion Square.