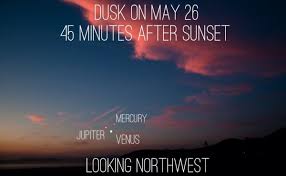 Look low in the west-northwest after sunset in late May, and you can watch Venus, Jupiter, and Mercury pirouetting through the tightest gathering of three naked-eye planets that the world will see until 2026.

“Here’s a beautiful chance to see three planets all together,” says Alan MacRobert, a senior editor at Sky & Telescope magazine. “Add the Earth under your feet, and you’re seeing half of the solar system’s planets at once. They’ll be a lovely part of the spring twilight.”

“The view should be best about 30 to 45 minutes after sunset,” continues MacRobert. “And think photo opportunity. Set up a camera on a tripod, zoom to the max, and try different time exposures.”

The show will continue with two of the planets well into June.

The program of events:

May 20-23. Venus and Jupiter, the brightest two planets of the solar system, have been approaching each other in the western evening sky for weeks. As they draw close together now, Mercury—currently the third-brightest planet—climbs up from the horizon day by day to join them. By May 20th you should be able to spot Mercury to the lower right of the other two. It moves up closer to bright Venus for the next few days.

May 26. The grouping is now tightest; all three planets fit in a 2.5-degree circle, forming a striking little triangle. Your thumb at arm’s length will just about cover them.

May 27. Jupiter appears right next to Venus. After this evening, Jupiter pulls down and right of Venus and Mercury, disappearing from view in early June.

May 28 and later. Mercury, meanwhile, is coming into its own. It’s entering its best evening showing of 2013, soaring ever higher above Venus until about June 7th. At that point it slowly begins to sink back toward Venus and also starts fading—slowly at first, then increasingly fast after mid-June.

The fainter star Elnath, or Beta Tauri, which appears with them in the sky, is more than a million times farther away in the background at a distance of 130 light-years.

A PLANET-VIEWING PARTY on May 27 would make a nice addition to anyone’s Memorial Day barbecue. One might take a cue from the ancient Japanese custom of inviting dinner-guests to jointly write a “renga” or series of linked 17-syllable haiku poems, one contributed by each guest. Each new haiku would begin with a thought from the previous one, but it would be developed it in a different way. Your Memorial Day renga might begin with a haiku like:

In the spring twilight,
Three bright guests are dropping by—
Let us welcome them!

It’s a fun and creative thing to do over dessert and coffee!