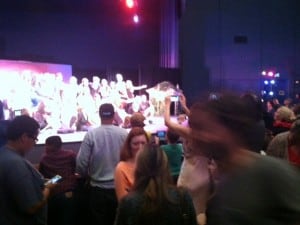 The first weekend of May was the culmination of a whole semester of effort for the cast and crew of “Once On This Island.” Proud parents and happy audience members were there to take pictures of the final tableau at the end of the curtain call, and the Robert Frost Auditorium was buzzing with exclamations and compliments. The two performances garnered a lot of applause, and what the students got out of it may be reverberating for many years to come.
In her first adventure as a producer, Mariko Rooks took on a job that covers the action of an air traffic controller, the creative vision of an artist, and the patience of a tree. As the producer of “Once…” she declared herself pleased. ( video clip IMG_0225)

With the aid of Isabel Berliner as the Musical Directo, Celine Cuadra as the Director, and Toscana Finke ans Choreographer, Rooks got a cast of almost thirty CCMS students on an island of independence. Working with only minimal help from adults, they put on a show that shone with enthusiasm, talent and effort.

Cuadra unexpectedly had to call on her own thespian talents as well, when cast member Eliza Spear was injured and Cuadra took on the large role of Mama Euralie, learning the entire score in only a few days before the performance.

With their all-student production and support crew of scenery designers and builders- Harper Barth, Arely Hernandez, Matthew Takara, Samantha Koyama and Rebecca Mirvish, costumes by Claire Glickman and Rachel Dolan, and hair and make-up by Cheya Potter, Helen Abebe, Sarah Toutounchian, there wasn’t an element of the show that was not solidly student run.

They might be missing that island as they get back to the more mundane student realities of testing and homework, but there’s a lot to learn from running the show on your own. The next project they take on might need even less input from advisors and parents; autonomy.