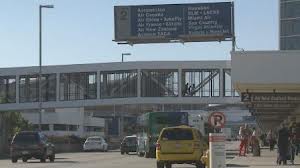 Ontario and the San Bernardino County Board of Supervisors will join Inglewood and Culver City in a legal battle over an environmental plan for LAX approved by the Los Angeles City Council last week.

According to the Long Beach Press-Telegram, the three cities and the county announced Tuesday that they are seeking legal mediation with Los Angeles over its approval of a $4.8 billion plan to modernize Los Angeles International Airport.

Officials believe the modernization program can further negatively impact LA/Ontario International Airport, which has already seen a 40 percent drop in passenger traffic since 2007.

Los Angeles has five days to either respond or deny the request. If the request for mediation is denied, the four entities have 30 days to file a lawsuit.

“They have starved its satellite airport (ONT) to siphon traffic to LAX. They are extorting money under the auspice of the L.A. system to build up LAX,” said Ontario Councilman Jim Bowman.
Related: Los Angeles airport officials disappoint ONT supporters

The Alliance for a Regional Solution to Airport Congestion, a Westchester community group long opposed to the plan, filed a request asking for mediation on Friday. L.A. officials have five days to respond from that date.

Douglas Carstens, an attorney representing ARSAC, said he would be interested in joining efforts with the three other cities and the county.

“We share a number of concerns about regionalization and the lack thereof,” he said.

Inglewood, Culver City and ARSAC were involved in a 2006 settlement agreement in which LAWA agreed it would redistribute air traffic throughout the region to avoid a lawsuit. The three entities were concerned, among many reasons, about traffic and air quality impacts that could result if LAX were modernized. Ontario was not involved in that lawsuit.

Tuesday’s action is a separate claim filed by Ontario on April 11. The city is seeking to dissolve the 1967 joint-powers agreement that rescued ONT from failure but now is blamed for strangling the airport’s prospects because, Ontario officials contend, LAWA is putting its resources into LAX and mismanaging ONT.

“We need control of the airport. We can’t continue to listen to the empty and shallow words of LAWA regarding our airport “” it’s simply too important,” Bowman said.

The San Bernardino County supervisors gave their approval to get involved in the ONT issue during Tuesday’s board meeting. The action also allows the county’s counsel to discuss joining any future litigation with the three cities.

“We believe it would allow for LAX to handle more air traffic that would otherwise go to Ontario, and that affects the regional economy,” San Bernardino County spokesman David Wert said.

Supervisor Gary Ovitt said ONT plays a vital role in the county’s future economic development, which is dependent on a vibrant airport.

“It just makes sense for San Bernardino County to support something that is going to have tremendous economic impacts and implications for the future of our region,” Ovitt said following Tuesday’s board meeting. “If they (LAWA) were to continue to expand (LAX), it would be at the expense of Ontario and our region. We’re not going to stand here and allow that to take place without at least fighting for our future.”

Bowman commended the supervisors decision to get involved in the battle.

“They get it. They understand the importance of local control and the destiny of our economy,” he said. “There’s reason we have to consider a lawsuit, because L.A. doesn’t get it.”