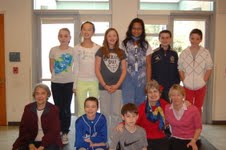 Incredibly, we had reached the sixth and final session of this year’s Intergenerational Writing Project. Teacher Diana Bender and I shared a look of disbelief at how quickly the time had flown since our initial session on January 23, now bringing us to March 6, back at the Culver City Senior Center for our wrap-up.

Diana presented Miriam and me with a booklet containing copies of all the writing that had been done during this year’s project, an incredible memento indeed. It included two acrostic poems that the students had just created based on our first names and dedicated to Miriam and me. I loved it!

In turn, Miriam and I had our own presentations to make to the group. At our first meeting she had mentioned that when someone is in need of comforting, a simple offer of tea is like a hug in a cup, a comment that had so impressed the students that they included it in the acrostic poem they’d written for her. Serendipitously, she reached into her tote and brought out a mug festooned with words geared to learning and containing a bag of candy. She presented it to the group as a “hug in a mug,” which I thought was charming.

Since I am also an artist and create my own holiday cards each year, I brought in a batch of my 2012 cards and passed them around as my message seemed to tie in to the themes we’d been discussing. I had been inspired by the London Olympics and the accomplishments of the female gymnasts, and had sketched Gabby Douglas, grinning widely with her arms raised in triumph. My written message emphasized our good fortune in each having a daily opportunity to connect with, bring forth and present our own uniquely best and highest self.

Diana had polled the students in advance to obtain feedback regarding what they had most enjoyed, their favorite discussion and something they had learned, and I was heartened to receive their very positive comments.

Asked what they had most enjoyed, their responses emphasized the sharing of viewpoints and the value the seniors brought to the table: “I loved when people read their poems because they sent messages. They were really good poems. I loved the seniors because their writing was amazing and they shared with us a lot of information that I will always remember. It was a great opportunity to become more familiar with the community.” “My favorite part was getting to know the seniors because they had interesting stories to tell.” “I liked how they visited us and we visited them “ “I like being inspired by the elders. They gave me a different outlook on life.” “I liked getting feedback from the seniors.” “I really enjoyed spending time with the seniors.” “I enjoyed listening to the different points of view.”

When asked to describe a favorite discussion, a student referred back to our first session by commenting “I enjoyed the picture activity because we got to see what we didn’t know about one another.” (Prior to that session we’d been instructed to choose three important events from our life and illustrate each by bringing a photo or other visual depiction representing a moment before, after or during the event.) One student preferred not to choose: “All of them. They were all fun because the values that we went over will be with us in life.” And the session regarding peace had a strong impact on another: “My favorite discussion was peace because I realized that peace means many different things to different people. I realized that peace can mean love or even opinions.”

As for something that they learned: “I am going to be happy when I am older because I will be able to look at my life with pride and express my stories in any medium I want.”

The students at my table were not a homogenous group but were comprised of different races, religions and ethnicities. By no means did they think in lock-step, and I had observed distinct differences in personality and outlook. But it was apparent that they had been encouraged to share a culture that embraces enlightenment, compassion and positive action, a culture to which they were clearly committed.

This permeated the advice poems they presented, incorporating concepts we’d covered in our previous meetings, and I was blown away by their work. Several students turned in long poems, all contained excellent advice and some included touches of humor. I don’t know what grading system the school uses, but I would give them all an A+++.

Having quoted extensively from everyone’s work in past stories, I am including just a couple of representative excerpts so you can share the wonder I experienced as I listened to all of the poems – and believe me, I was impressed:

“Consider yourself a crayon/You may not be someone’s favorite color/But someday they will need you/To complete their picture/Shine bright like an LED light bulb/Not like a diamond/Because they don’t shine as bright as LEDs/And they’re expensive.”

There were also exhortations to study, work hard, read for fun, have a positive attitude, make a plan and then implement it, rethink and be flexible, show your true colors, and be thankful for receiving and generous in giving.

They had learned their lessons well.

I couldn’t believe I was listening to kids whose average age was 12. Although it wasn’t April 1, surely a huge practical joke had been perpetrated and these were actually high school kids in disguise. I was awed by the quality of their writing. After the session ended Diana and I chatted briefly and I told her how amazed I was by this group. She felt that the concepts explored this year had resulted in a cumulative effect as the weeks went by and the students assimilated the ideas previously discussed. Accordingly, she believed this was reflected in the increasing quality of the writing. Made sense to me.

As in the other sessions, I also completed the homework assignment and since this is the final story regarding this year’s project, I’m including my poem, THE “ALSO” PEOPLE, in its entirety:

These are the “also” people
And I have been fortunate enough to meet with them
In a synergistic collaboration
Together we explored four core concepts
We started with kindness, the universal template for decent behavior
That laid the foundation for moral courage
And built toward our roles as citizens
And proponents of peace
So many interpretations
So many layers
So many prisms

And yes, there are skeptics among them
And that’s a good thing
They are also “also” people
And essential to the solution process
Because skepticism doesn’t automatically equate to negativity
But to a questioning nature
To being grounded in reality
To seeking practical solutions
In the real world. We need skeptics
They provide that little dash of pepper
That if used to perk up the taste and not overwhelm it
Can enhance a dish
By introducing an intriguing new flavor to the palate

Gaby Akana, Turning Point’s Middle School Division Head, had previously told me that “students and seniors are often surprised to learn from the other generation as well. They realize that they have more in common with each other than they ever thought possible! These moments are significant because they are spontaneous and beautiful and representative of the overarching goals of our service learning program: to meaningfully connect students with the community and its history; as well as to foster their understanding of, and engagement in, the world beyond the classroom. We are thrilled to have this partnership, and it is my hope that it continues for many years to come!”

As it is mine, Gaby . . . as it is mine. So far as I’m concerned, all seniors would benefit greatly from adding this project to their bucket list.