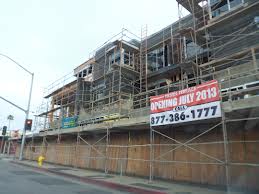 With Tilden Terrace under way, the next affordable housing project in line for Culver City will be the Globe Avenue site, but without Redevelopment funding, it’s a game of chess that the city must strategize.

CaliforniaCityNews.org reports in their recent update,“Cities Continue to Struggle in Shutting Down Redevelopment.”

Just over a year after the state shut down local redevelopment agencies, cities are still struggling to figure out how to cope with the loss. Earlier this month, state lawmakers held a meeting to hear from cities and counties about how the shutting down of redevelopment agencies is going for them.

“We’ve got at least four projects that were in the pipeline when redevelopment was eliminated,” Mayor Andy Weissman said. “We are here to let the committee know that the process currently in place will not enable those projects to move forward.”

Weissman wasn’t alone in his sentiments. Many cities and counties across the state have been unable to figure out how to deal with debts and projects they already planned to pay for using redevelopment funds, much less how to go forward and continue with projects typically funded by redevelopment money. In fact, only 17 out of 400 redevelopment agencies have completed closure.

The League of California Cities has noted that closing redevelopment agencies has halted critical projects across the state. Executive Director Chris McKenzie said creating new affordable housing programs in particular has essentially stopped, and city budgets have been affected dramatically.

As for Globe Avenue, a site that has been on the target for affordable housing for almost a decade, the official plan is to work with Habitat for Humanity.

Habitat for Humanity will construct the project with prospective homebuyers and members of the community and will commence construction immediately but can only do so with clear title to the property which has been held up by state’s Dept. of Finance because of their interpretations related to redevelopment of the site.

Earlier this month, Weissman, along with City Manager John Nachbar, and Community Development Director Sol Blumenfeld went to Sacramento at the suggestion of Assemblymember Holly Mitchell, who has been trying to assist Culver City in freeing up the Parcel B, Washington National TOD and the Globe projects.

Weissman spoke at the Assembly’s Budget Sub-Committee 6 Hearing Regarding Elimination of Redevelopment.

“I made the point that the creation of affordable housing was a legislative priority,” he offered,  “and that there are State mandates such as compliance with our General Plan Housing Element, creating jobs/housing balance and complying with our Regional Housing Needs housing allocation and that this land was purchased specifically from a state agency by the RDA for the express purpose of creating affordable housing. Emphasis was also placed on Culver City’s desire and need to continue to address affordable housing and that without new sources of low moderate income housing funds we will be forced to abandon our Comprehensive Affordable Housing Strategy and cancel housing projects allocated for funding over the next five years.”

The DOF, as part of the unwinding of redevelopment and the taking of the low and moderate income housing set aside monies said no; that Culver City could not proceed to transfer the Globe property to Habitat for Humanity for HfB to build the project.

But the tide turned unexpectedly. “We left the hearing and were headed to the airport when I got a phone call from Assemblymember Mitchell, ” said Weissman, “informing me that when the hearing concluded, she was approached by the DOF representative who was at the hearing as was informed that the DOF had reconsidered and reversed its positin on the Globe project and that we would be advised of that decision in writing. We are waiting to be so advised.”

There are few hopeful options for cities right now. McKenzie said he is now focusing on trying to attract private sector money to cities and counties to revitalize urban areas. Assembly Member Bob Blumenfield co-authored a bill last year making it easier for local governments to issue bonds, but Governor Jerry Brown vetoed the bill. He’s likely waiting to see how much the state will be able to recapture from redevelopment funds before promising funding to local governments again.