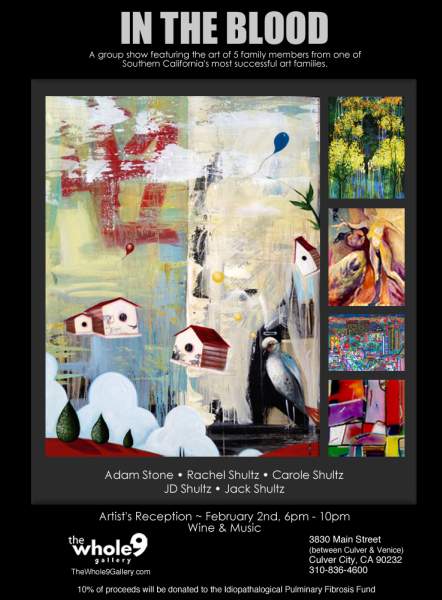 When discussing notable political families, the Kennedys immediately spring to mind. In acting it’s the Barrymores. Starting this weekend Culver City will have an extraordinary first-in-a-lifetime opportunity to see why the Shultz family is so highly regarded in the world of fine art.

It’s been said that we should aspire to paint well with the colors we are given, and there is no doubt that this prolifically gifted family was right up there at the head of the line when the colors were handed out. The abundant creativity of these five distinguished artists, Carole Shultz, Jack Shultz, Rachel Shultz, Adam Stone and JD Shultz, will be on display at their first family group show, “In the Blood,” opening at The Whole 9 Gallery at 3830 Main St. in downtown Culver City on Sat., Feb. 2, continuing through March 16, with a reception from 6 p.m. to 10 p.m. on opening night. Gallery hours are Monday – Friday 10 a.m. to 6:30 p.m. and Saturday 12 p.m. to 6 p.m. For further information call (310) 836-4600 or visit thewhole9.com.

Carole Shultz, the matriarch of the clan, had long dreamt of being part of a gallery show with her entire family represented: husband Jack and children Rachel, Adam and JD. Sadly, in 2004 she lost her difficult 14-year battle with idiopathic pulmonary fibrosis (“IPB”), a scarring or thickening of the lungs without a known cause.

For those unfamiliar with IPB, its main symptom is shortness of breath. As the condition progresses and the damage to the lungs intensifies, breathlessness can occur when engaging in fairly minor physical activity. Speaking on the phone and eating become challenging to the point of near impossibility. Other common symptoms include chronic dry, hacking cough, fatigue and weakness, chest discomfort, loss of appetite and rapid weight loss.
When asked how this show came about, Heidi Huber of The Whole 9 Gallery explained that “we had previously worked with the siblings. Adam and JD had a show together and Rachel had a separate show. The minute you’re around them, you can really see how close they are. They enjoy one another, they support one another, and there is an unbelievable energy that surrounds them, permeated by Carole’s spirit and influence. Lisa Schultz (gallery founder, similar name, no relation) and I always thought their story, a family of five successful artists, was so interesting, and when Lisa presented them with the idea of a group show, their reaction was ‘Great, we love it!’” And so will you.

The show is dedicated to the memory of Carole Shultz, and 10% of all proceeds will be donated to the Pulmonary Fibrosis Foundation, the mission of which is to help find a cure for IPB, advocate for the pulmonary fibrosis community, promote disease awareness, and provide a compassionate environment for patients and their families. Information about its activities is available at pulmonaryfibrosis.org.

Carole’s legacy is not limited to the amazing body of her own work. It also encompasses the husband and children whom she inspired. This show provides an unforgettable commemoration of the family’s work, a journey with roots that stretch back to when Jack and Carole, two Los Angeles natives, fell in love. They were only 10 years old.

They married as young adults, with Jack working in downtown Los Angeles as a social worker and Carole, a stay-at-home mother, sculpting figures in clay while caring for her family. It wasn’t easy raising a family under these circumstances, and they struggled to make ends meet.

Carole amassed a collection of figurative pieces, many of which were created by using her children as models. One can only imagine what that childhood list of chores must have looked like: “make bed, set table, strike a pose . . . “

She began selling her work at a weekly art festival held in a West Hollywood parking lot, exhibiting alongside 25-30 other artists. She was so successful that Jack quit his day job in order to manage her sales. They then applied to another festival in Westwood Village, and momentum rapidly accelerated. They embraced the burgeoning Los Angeles art scene and the embrace proved mutual.

After a decade of selling Carole’s sculptures, Jack was inspired to explore his own artistic desires. Painting on glass and then Plexiglas with a bold and imaginative use of color, his work was infused with humor and an innate sense of design. He is one of the few American painters to have mastered the technique of reverse painting, producing a vibrant body of work that ranges from contemporary abstracts to realistic works of nature, work that not only resides in many prominent collections but has been featured in numerous movie and television settings. “By listening to high energy music while painting, I see the entire process as a wonderful dance,” he says.

As for the three children who grew up in the center of this creative storm, they survived to become prominent figures in the same street scene that their parents helped pioneer, each exhibiting unique styles and sensibilities while sharing a common thread of sensitivity to the beauty and awe inherent in nature and spirit. Their work is collected internationally and is represented in a number of corporate and private collections in and around the United States.

The breadth of their diversity is enthralling and impressive.
Rachel Shultz’s paintings can be described as emotional landscapes intersecting dreams, intuition and reality. Her works encompass reverse acrylic painting on Plexiglas as well as oils on canvas, and her pieces have been collected by celebrities including Samantha Mathis, Francis Ford Coppola and Caroline Rhea. Her reverse abstract forest paintings on Plexiglas explore color’s role in communicating deep emotional states, while her bold, abstract expressionistic works on canvas reflect the similarities between animal and human behavior. Additionally, she expresses her creative impulses by fashioning the chic bohemian handmade leather and precious metals jewelry that can be found at ETSY.com under Rachel Jane Jewelry.
The first question one might ask of contemporary urban expressionist painter Adam Stone is why he doesn’t use the family name. It’s simply that he wanted to create his own separate identity and be able to cash the checks he was receiving as he traveled throughout the country selling his work, checks that would inevitably be made out to some variant of Shultz. And a name like Stone is fairly mangle-proof.
He is familiar locally through his “Legends of Jazz” mural, a project in West Los Angeles that, in collaboration with the American Red Cross, aided the victims of Hurricane Katrina. His latest body of work reflects the redirection of his focus from human figures to those in the animal realm in order to represent the wonder, fragility and intensity of the human condition. Well-known collectors of his work include Eddie Murphy, Rosie O’Donnell and Nils Lofgren.
The work of JD Shultz blends complexity with whimsy and is distinguished by dreamlike cityscapes, thought-provoking abstracts and fantasy surrealism. His paintings are in the collections of such notables as Larry King, Connie Stevens and Jonathan Mostow, as well as in the Bellagio and Aria hotels in Las Vegas and in the RockWalk Museum. His abundant creativity includes music as he is a self-taught multi-instrumentalist, producer, engineer, mixer and songwriter. A featured artist for the GRAMMY/MusiCares Foundation for the last seven years, he has raised over $100,000 for the organization through the sale of his paintings
Just as the apple doesn’t fall far from the tree, the paint doesn’t flow far from the brush. Art is unquestionably in the blood of the Shultz family, whose tribute to Carole honors her memory by not only displaying the multiple artistic talents of this unique family in one setting but also by raising money to combat pulmonary fibrosis, the insidious disease that took her life but couldn’t vanquish her spirit, a spirit that, as gallery visitors will quickly see, triumphantly lives on in the wonderful art that the family creates to this day.