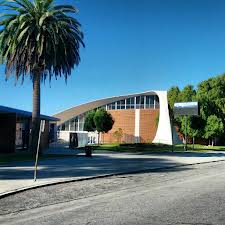 The Culver City School District Offices were the focus of lots of upcoming construction activity for the Elenda campus complex. On Monday evening Jan. 28. the board met informally to hear presentations on the renovation of the Robert Frost Auditorium, the progress on the solar power project, and the improvements to the sports fields.

Beginning with the Frost, the good news is that the broken seating has already been repaired, and the plans to refurbish the lights and the sound are in development. Craig Hodgetts, of Hodgetts and Fung, the firm handling the renovation, addressed the meeting with care and enthusiasm. “We have a scene pit – something that’s very rare to find at a theater at a public school- that’s been unused for so long, it’s just filled with trash.”  The four by twenty by twenty depth into the stage allows student crews to work on scenery without the use (or risk) or working on ladders.

Bob Scales, the project consultant, was lauded as being knowledgeable about in theater “in just about any aspect you can consider.” Details in regard to acoustics and lighting were brought up, and a survey was planned to be undertaken in another three weeks to go into more depth on what the Frost will need to be the first class performance venue that the school requires.

Mike Whatley of SunPower, the company solarizing the school, gave details on the plans, the costs and the benefits of installing the solar system on the high school campus. While the Culver Park School moving to the bungalows displaced one array of solar panels, a change in regulation for Edison made another array of panels unworkable as a car-port structure behind the running track. With these changes to the original design, more space at Farragut Elementary will be utilized for panels, and the project is scheduled to be ‘turned on’ in September of 2013.

Todd Johnson of the Environmental Sustainability Committee asked the next most important question “When does the district get the first check? ”

The much debated and re-designed athletic fields are now under the care of Balfour Beatty construction, and this aspect of the campus has had more revisions that both of the other two projects combined. “People are going to be disappointed,” said Superintendent Dave LaRose, “if the last time you saw this project was the poster out there in the lobby last year. There have been changes, and we have to work with the funds we have available. We started with safety standards, and went to wish list, and everyone’s wishes just cannot be funded at this time. ”

The expenditure for the project is scheduled for $4.85 million for Phase 1 of the athletic field master plan, based on the budget, with the forestalled Phase 2 requiring an additional $3.65 million not currently funded. Phase 1 will include a synthetic football field and track, a home team building with ADA compliant rest rooms, ticket booths and concession stand, site infrastructure and lighting upgrades, and a renovation rather than a reconstruction of the existing bleachers.

The long awaited elevator is also scheduled to be installed by September of 2013, making the high school campus ADA compliant for the first time.