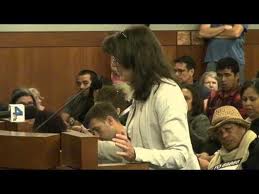 Here are some highlights from the City Council meeting of January 28, 2013.

• Presented Certificates of Recognition to Jersey Mike’s Subs for the Culver City Teen Center Fund Raising Event which raised in excess of
$1,400

• Approved a Purchase Order with Mity-Lite, Inc. in an amount not-to-exceed
$76,000 for the purchase of replacement equipment and furniture for the
Veterans’ Memorial Complex

• Awarded a Contract to Malibu Pacific Tennis Courts, Inc., for the Fox Hills
Park Playground Project, in the Amount of $93,999

• Accepted a Donation of Equipment and Services to the City for Use in
the Parks, Recreation and Community Services Department from the
Culver City Senior Citizens Association and Team Santa Monica

* Approved a Recommendation from the Parks, Recreation and
Community Services Commission to Extend the Designated Dog Path
(Pooch Path) at Culver West Alexander Park to include the
Walking/Jogging Trail Located within the Park

• Discussed the Proposed Renaming of Bush Way After Albert and Ursula
Vera and Directed the City Manager to schedule the item at a future City
Council meeting after providing notice of the City Council’s intent to
consider such renaming.  (See Just a Thought- Wife Beater Street)

• Discussed a Proposal to Establish a Centennial Committee for the 100th
Anniversary of the City and Directed the City Manager to proceed with
the establishment of this Committee by preparing an item for
consideration by the City Council at a future City Council meeting.