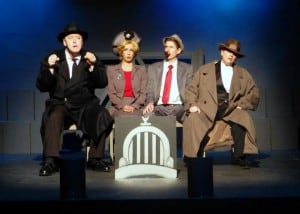 Putting Hitchcock on stage ? It’s not a MacGuffin, it’s the Kentwood Players opening tonight with the Tony Award winning comedy thriller “The 39 Steps.” Running from Friday, Jan. 11 to Saturday, Feb. 16 on Fridays and Saturdays at 8:00pm and Sundays at 2:00pm at the Westchester Playhouse, located at 8301 Hindry Avenue in Westchester (LA 90045). The production is directed by Ben Lupejkis, and produced by Lori A. Marple-Pereslete and Tony Pereslete by special arrangement with Samuel French.

Adapted by Patrick Barlow from the novel by John Buchan and the movie by Alfred Hitchcock, “The 39 Steps” is a hilarious, comedic, and faithful rendering of Hitchcock’s classic. Barlow based his adaptation on the original concept by Simon Corble and Nobby Dimon of a two-actor version of the play, but Barlow’s version calls for the entirety of the 1935 mystery-thriller movie to be performed with a cast of only four playing all 30 characters. Thus the film’s serious spy story is played with tongue firmly in cheek, and the script is full of allusions to (and puns on the titles of) other Alfred Hitchcock films, including Rear Window, Psycho, Vertigo, and North by Northwest.

One actor plays the hero, Richard Hannay, an actress plays the three women with whom he has romantic entanglements, and two other actors play every other character in the show including heroes, villains, men, women and even the occasional inanimate object. It is this dexterity that fuels the action for this highly theatrical comedy thriller that includes an escape from a moving train, a leap from a bridge into frigid waters, and a narrow miss with a malevolent airplane bent on destruction.

Tickets are $18.00 with a $2.00 discount for seniors, students, servicemen, and Metro riders who present their same day ticket or monthly pass when purchasing full price tickets at the box office. To purchase tickets by phone, please call (310) 645-5156 during box office hours, Wednesday through Saturday from 4:00-7:00pm. You may also purchase tickets online at www.kentwoodplayers.org.