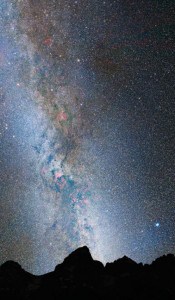 Look up at the night sky and you’ll see stars, sure. But you’re also seeing planets—billions and billions of them.

That’s the conclusion of a new study by astronomers at Caltech that provides yet more evidence that planetary systems are the cosmic norm. The team made their estimate while analyzing planets orbiting a star called Kepler-32—planets that are representative, they say, of the vast majority in the galaxy and thus serve as a perfect case study for understanding how most planets form.

“There’s at least 100 billion planets in the galaxy—just our galaxy,” says John Johnson, assistant professor of planetary astronomy at Caltech and coauthor of the study, which was recently accepted for publication in the Astrophysical Journal. “That’s mind-boggling.”

“It’s a staggering number, if you think about it,” adds Jonathan Swift, a postdoc at Caltech and lead author of the paper. “Basically there’s one of these planets per star.”

The planetary system in question, which was detected by the Kepler space telescope, contains five planets. The existence of two of those planets had already been confirmed by other astronomers. The Caltech team confirmed the remaining three, then analyzed the five-planet system and compared it to other systems found by the Kepler mission.

The planets orbit a star called an “M dwarf”—a type that is smaller and cooler than the Sun and accounts for about three-quarters of all stars in the Milky Way. The five planets, which are similar in size to Earth and orbit close to their star, are also typical of the class of planets that the telescope has discovered orbiting other M dwarfs, Swift says. Therefore, the majority of planets in the galaxy probably have characteristics comparable to those of the five planets. 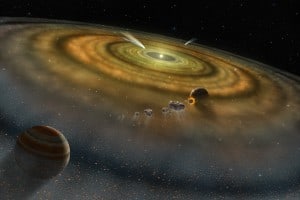 While this particular system may not be unique, what does set it apart is its coincidental orientation: the orbits of the planets lie in a plane that’s positioned such that Kepler views the system edge-on. Due to this rare orientation, each planet blocks Kepler-32’s starlight as it passes between the star and the Kepler telescope.

By analyzing changes in the star’s brightness, the astronomers were able to determine the planets’ characteristics, such as their sizes and orbital periods. This orientation therefore provides an opportunity to study the system in great detail—and because these planets represent the vast majority of planets that are thought to populate the galaxy, the team says, the system also can help astronomers better understand planet formation in general.

“I usually try not to call things ‘Rosetta stones,’ but this is as close to a Rosetta stone as anything I’ve seen,” Johnson says. “It’s like unlocking a language that we’re trying to understand—the language of planet formation.”

The implications of a galaxy chock full of planets are far-reaching, the researchers say. “It’s really fundamental from an origins standpoint,” says Swift, who notes that because M dwarfs shine mainly in infrared light, the stars are invisible to the naked eye. “Kepler has enabled us to look up at the sky and know that there are more planets out there than stars we can see.”