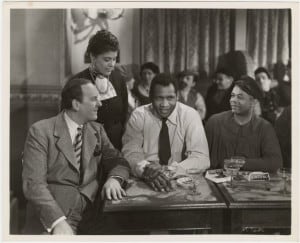 Take a break from your holiday shopping and join the MCLM for a screening of Big Fella, based on the book Banjo Man by Claude Mckay. Big Fella is one of Paul Robeson’s most important performances, allowing him to play the lead role with dignity, away from normal Hollywood stereotypes. Robeson plays Joe, an American in France working on the docks. Joe helps the police find a missing English boy, who has run away from his parents and the two become friends. Robeson has several musical numbers in the film that show off his distinctive baritone voice. Robeson’s wife, Eslanda Robeson, also appears in the film with a small cameo as a café owner. The screening will be followed by a discussion about the film and the short, but memorable film career of Paul Robeson.