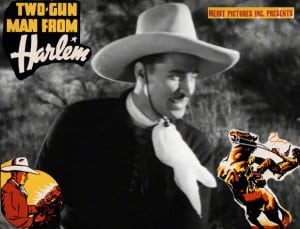 Join MCLM as we showcase Hollywood’s first African-American Cowboy, Mr. Herb Jefferies, also known as the “Bronze Buckaroo.” Jefferies starred in several all black low budget westerns in which he would sing his own western compositions. This month, we are featuring Mr. Jefferies in the film Two-Gun Man From Harlem (1938). He plays the role of Bob Blake, a cowboy who goes to Harlem and poses as a preacher-turned gangster in order to solve a crime he was wrongfully accused of. Hope you can join us on Saturday the 17th at 4 pm for this classic film as we kick off the holiday season!

Please note that Two-Man Gun from Harlem replaces the Amos and Andy program originally announced due to copyright issues.