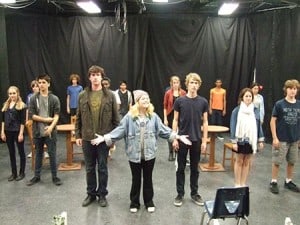 Thornton Wilder’s Pulitzer Prize-winning play Our Town has been part of the American cultural landscape since its debut in 1938. This character story about an average town’s citizens in the early 20th century depicts their everyday lives through love and loss, comedy and tragedy. The setting is Grover’s Corners, New Hampshire, and the action covers scenes of its history from 1901 and 1913.

Directed by Justin Lujan and produced by AVPA Creative Director of Theatre Jill Novick, the AVPA Blurred Vision Theatre Company has been working since September to present this classic play in the Sony Pictures Theatre at the Robert Frost Auditorium on the Culver City High School campus at 4401 Elenda St.

“This world that Thornton Wilder has created is universal, touching, poignant, and timeless,” said director Justin Lujan. “Even though Our Town is set in the small fictitious town of Grover’s Corners over a century ago, it is still relevant even in 2012 in a very real, very sprawling metropolis like Los Angeles. With skill and artistry Thornton Wilder has been able to connect our common place daily activities, like getting the kids ready for school or stringing beans, to the exploration of our place in the cosmos and our human experience, from birth to falling in love to death.”

Performances will take place at 7 p.m. on November 8-10 and 15-17, as well as 1 p.m. matinees on November 11 and 17 Seating is limited, so pre-purchase is highly encouraged. For more information and to purchase tickets visit www.avpa.org. General admission tickets are $15, and tickets for children under 12, students with ASB, seniors, and CCUSD faculty/staff are $10.

“The world and journey in this show are challenging and the cast and crew have been able to rise to that challenge to bring this world to life,” said Lujan. “I truly hope the audience appreciates all the hard work that has been put into creating this simply beautiful world of this Pulitzer Prize-winning drama.”

Pictured above, the cast of AVPA’s production of Our Town in rehearsal.