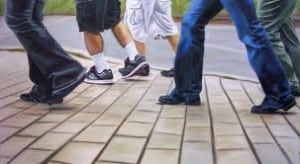 Realizing the import of Measure Y, over 225 concerned residents came to Vet’s Park for the Yes on Measure Y Walk this past Saturday. Mayor Andy Weissman got things started with an inspirational talk and Vice Mayor Jeff Cooper explained the importance of Measure Y, “Measure Y is the half-cent city sales tax on the ballet in November. If it passes, Measure Y will help maintain essential Culver City services such as 911 emergency responses, paramedics, police and fire protection. While adding just 5 cents to a $10 purchase, Measure Y would raise an estimated $8 million annually for local services – with the majority of revenue coming from non-residents shopping and dining in Culver City.”

Former Mayor Alan Corlin was astounded by the outpouring of support from Culver City’s youth. “It’s great to see our students so involved and so motivated.It never surprises me the number of people that will do the right thing when the right thing needs to be done.”

When asked why he would wake up early on a Saturday morning to walk the City for Measure Y, Culver City Middle School student Matthew Paspalis responded, “We have a great city. I want to make sure that Culver City is as great in the future as it is now!”

Retired school board member and senior citizen Madeline Ehrlich effused, “I think it was an amazing turnout. Today showed the tremendous city-wide support for such an important Measure.”

If Measure Y is unsuccessful, the city will need to make more severe cuts to essential city services, potentially including, among other things, a reduction in police patrol levels, an increase in response times to emergency calls, the reduction or elimination of programs for seniors, a reduction in street, sidewalk and tree maintenance, and the elimination of most park and playground staffing and programming.

Measure Y is on the November ballot. For more information, please visit www.yesony.com