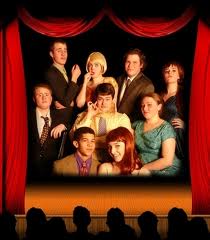 Kentwood Players was founded by the late Arky and Jan Marcom, Elizabeth Thornberg and Betty Francis in December 1949, and performs out of the Westchester Playhouse, located at 8301 Hindry Avenue, LA 90045. In 2009-2010, the group celebrated its 60th anniversary season during which the musical, “Li’l Abner” was presented from March 12 to April 17, 2010. The production was directed and choreographed by Victoria Miller and produced by Susan Goldman Weisbarth, and both went on to win the group’s Marcom Masque Awards as Best Director and Best Producer for the season.

Director Dan Guntzelman’s award-winning documentary film “Opening Night” captures the rehearsal process leading up to the Kentwood Players production of the quintessential American musical, “Li’l Abner.” And it does so with no small debt to jazz great David Benoit, who composed the original score. Guntzelman interviewed many in the cast, production team members, and the Kentwood Players Board of Directors who all shared how they participated in the musical’s production as well as heartfelt stories from the all-volunteer group’s 60-year history. Learn about the community behind “putting on a community theatre show.”

“Opening Night” will be shown on KCET’s “Open Call” series on Thursday, October 11 at 9:00pm and Tuesday, October 16 at 11:59pm on KCET-HD. Please tune in and enjoy this heartwarming story of what it takes for an all-volunteer, non-profit community theatre group to produce a major musical for the sheer joy of presenting live theatre to their community, the city of Los Angeles.

KCET’s “Open Call” series showcases Los Angeles’ vibrant arts community with a series of performances from leading Southern California arts institutions and schools. Hosted by internationally-acclaimed mezzo-soprano opera singer Suzanna Guzman, the weekly series includes full-length performances recorded live in theaters; company and artist profiles; and other unique works being performed across the Southland. Ms. Guzman, a Los Angeles native who has performed all over the world, sets the stage for viewers in each episode, contributing her unique insights into the evening’s performance. She encourages directors, artists and other key players in the production to provide additional commentary that helps tell the story of the organization and what it is presenting, which Dan Guntzelman included in his documentary.

“Opening Night” information can be found at www.openingnightthemovie.com where you can purchase a DVD copy. Ordering information is available at the Westchester Playhouse during its current production of “SCREAM QUEENS – The Musical” through October 20 on Friday and Saturdays at 8:00pm, Sundays at 2:00pm or its Kentwood Kids musical production “Rockin’ Robin Hood” on Saturdays, October 6, 13 and 20 at 11:00am and 2:00pm at the Westchester Playhouse.

For more information about Kentwood Players including our current productions, upcoming auditions, and our Kentwood Kids Children’s Theatre classes and productions, please visit the Kentwood Players website at www.kentwoodplayers.org. Show tickets may be purchased in advance by calling (310) 645-5156 or at the Westchester Playhouse box office one hour prior to show time. Kentwood Players can also be found on Facebook.

The public is invited to attend our general membership meetings, which are free and held on the third Wednesday of each month at 7:30pm at the Westchester Playhouse, located two blocks west of the San Diego Freeway and two blocks north of Manchester at 8301 Hindry Avenue in Westchester, CA 90045.