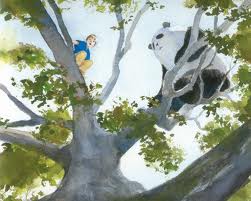 When a giant Zen master panda named Stillwater moves into their neighborhood, Michael and Addy embark on an incredible journey. Zen Shorts is made up of three ancient stories told through projections, nearly 50 puppets and incredible multi-media effects. Intertwining Zen stories with modern day issues of technology, building friendships and growing up, Stillwater’s tales are sure to strike a chord in everyone’s heart.

Suitable for children 7 and up, and adults, young and old alike!
This performance is made possible in part by the Culver City Performing Arts Grant Program with support from Sony Pictures Entertainment.

Rogue Artists Ensemble differs from other local theatercompanies primarily because it’s run by a collective of artists and designers. The ensemble collaborates with outside companies and other artists to create “Hyper-theater,” an innovative hybrid of theater traditions, puppetry and digital media that cultivates a unique audience experience. “Like other Rogue projects, Zen Shorts will include a variety of storytelling devices, humor for adults and children alike, and a story that will leave each audience member changed after experiencing such a vivid and creative theatrical experience!” says Artistic Director Sean Cawelti.

Since its inception in 2001, Rogue Artists Ensemble has garnered critical acclaim, being dubbed “the most buzzed about new arrival on the Orange County theater scene” by the Los Angeles Times in 2004 and called by the OC Weekly “a genuinely imaginative and gleefully creative troupe of theater artists.” Nominated by the Los Angeles Weekly for Mask Design for HYPERBOLE: epiphany and presented with a special award for “Theater Oriented Puppet Design” by the Orange County Weekly, the Rogues continue to deliver a product that piques the interest of theatergoers and non-theatergoers alike, most recently being honored with a Best Puppet Design Ovation Award and Best Comedy Ensemble LA Weekly Award Nomination for their original work D is for Dog.