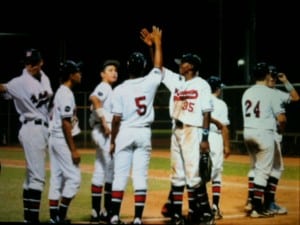 Westchester 14U Babe Ruth All Stars faced elimination Friday night in a “Win or go home” game against the bestride the State of had to offer. Westchester called upon Reggie Castro to start the game. Castro answered the call, shutting down e powerful Utah bats foe the first three innings.

Westchester jumped out to an early 2-0 lead in the first. First baseman LJ Gilliam opened the game with a single. Matthew Kanfer beat out a bunt single, moving Gilliam to second. Shortstop Grant Craddolph followed with a line single to lest, scoring Gilliam. After an Anthony Chavez sacrifice, Varlos Jacobo grounded to third, scoring Kanfer.

Kanfer led off the third inning with a single. Craddolph walked and Jacobo singled loading the bases. Left fielder Avery Allen singled to center, knocking in Kanfer and Craddolph, giving Westchester a 4-0 lead.

When Castro began to tire in the fourth, Westchester manager John Lopatto called upon game 1 hero Angel Dela Torre to pitch with two Utah base runners on. Dela Torre induced a pop out and a ground out, ending e Utah rally.

Dela Torre loaded the bases with one out in the top of the fifth, prompting manager Lopatto to call upon Ethan Lazar. Utah scored two on a wild pitch and a bad hop single to short, narrowing Westchester’s lead to two. Westchester answered with a run of their own in the bottom of the fifth on a Craddolph double to left and a Chavez line single to right.

Lazar cruised with e 5-2 lead until the top of the 7th and final inning. With one out, Utah put runners on first and second, and then scored two on a double to left. Lopatto went to lefty Matthew Kaplan with the tying run on second. Kaplan, the winning pitcher on Wednesday, induced the first batter he faced to ground to third. With two outs and a runner on third, Utah’s Jackson Birch popped to first basemen Gilliam, ending the game and Utah’s season.

Westchester advances to the championship series against Hawaii on Saturday. Westchester needs to defeat Hawaii twice Saturday in order to advance to the World Series, ironically to be held in Utah. Westchester ace, Anthony Chavez will get the call to start game one. Chavez has never faced Hawaii, but is looking forward to the opportunity. “Hawaii is undefeated and playing well. They got us last time, but I’m confident that we can take them. Our bats are just now heating up, and tomorrow is going to be a huge day for Westchester.”