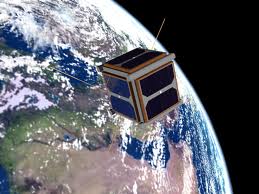 STUDENT-BUILT SATELLITES: A NEW WAY TO DO SPACE RESEARCH – Eleven tiny satellites called CubeSats will accompany a spy satellite into Earth orbit on Aug. 2, inaugurating a new type of inexpensive, modular nanosatellite designed to piggyback aboard other NASA missions.

“This is a new way of doing space research, funded by the National Science Foundation with launch arranged by NASA,” said CINEMA principal investigator Robert Lin, professor emeritus of physics and former director of UC Berkeley’s Space Sciences Laboratory. “This is our first try, but if everything works, we’re going to get a lot of good science out of this.”

CINEMA will obtain images of the “ring current,” an electrical current that encircles the Earth and which, during large magnetic “space storms,” can blow out power grids on the ground. By next year, CubeSat will be joined by three identical satellites—two launched by Korea and another NASA-launched CubeSat—that together will monitor the 3-dimensional structure of the ring current and warn of dangerous activity.

CINEMA is one of five university-built CubeSats aboard the Atlas V rocket; the other six are military or commercial. The main payload is NROL-36, a classified satellite commissioned by the U.S. National Reconnaissance Office.

NASA’s CubeSat Launch initiative provides an opportunity for small satellite payloads to fly as auxiliary payloads on previously planned missions. The nanosatellites are made of cubes that are approximately four inches on a side, have a volume of about one quart, weigh about two pounds, and are meant to be grouped in twos or threes for a particular satellite. CINEMA, for example, is comprised of three cubes. Some two dozen CubeSats are built or under construction at universities alone, and these 11 are the first to go into orbit.

For three years, Lin has overseen the construction and testing of CINEMA, aided by 25 UC Berkeley science and engineering undergraduates and graduate students. For two summers and winter vacations, some 10 students from Korea came to UC Berkeley to assist, while 8 students from Puerto Rico came to help with the engineering.

“There is more risk with these projects, because we use off-the-shelf products, 90 percent of the work is done by students, and the parts are not radiation-hard,” Lin said. “But it is cheaper and has the latest hardware. I will be very impressed if it lasts more than a year in orbit.”

The spacecraft carries a new instrument, STEIN, which detects energetic neutral atoms (ENAs) to produce an image of the high-energy charged particles in Earth’s atmosphere, mostly ionized hydrogen and oxygen.

“It’s like astronomy, but using neutral particles instead of light to create an image,” Lin said.

Lin and his UC Berkeley colleagues, including research physicist Thomas Immel and grad student John Sample, will communicate with CINEMA through the lab’s Mission Operations Center and Ground Station, a radio dish in the Berkeley hills.