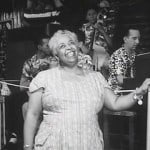 Join the MCLM in a rare screening of the 1956 film feature Carib Gold.  This marine time feature stars Ethel Waters acting and singing in one of her last roles on the motion picture screen.  Actors Coley Wallace and Cecil Cunningham play sailors who discover sunken treasure while working on a shrimp boat.  Retrieval of the gold becomes complicated when an unruly crew member gets greedy. This vintage film was preserved by the Southern Methodist University and thanks to their efforts, it can now be enjoyed by future audiences.  The film will be preceded by the 20 minute short “Rufus Jones for President,” which also stars Ethel Waters and features Sammy Davis Jr. in his first film role. At the conclusion of the film, a discussion will take place in our air-conditioned courtroom theater