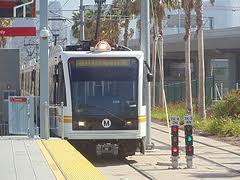 Culver City Crossroads  took a short ride, spoke to a few passengers and looked out the windows. John Bedke, a tourist from Oregon, said he thought it a very nice light rail system. “It has enough stops, it seems to be going where the traffic wants to go.” With a smile he added “Not as good as what we have up north, but of course, I have a bias.”

Allen Allport had his bicycle with him on the train. “I have a secured locker at the station, but they really need to put in more of them.” He also scoffed at the light covering of asphalt on the parking lot. “They were supposed to have had a federal matching grant, but they didn’t use it. You can see where they just threw down some tarmac and painted the parking spaces in. I guess they will have to add that to the list of things to be improved later.”

The train was fast; the Culver City train pulled into the station at Jefferson and La Cienega in about a minute and a half. We waited only five minutes for the next train going in the other direction. Passengers were sparse, but for day one, it was a good run.

Editor’s Note: Are you planning to use the train rather than drive for your regular commute ? If you are an LA area native, is this your first experience with public transit?