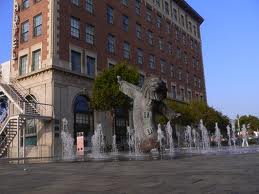 The City Council meeting of Monday, June 18 had a small population and a different perspective; just listening to the people. With a minimalist agenda and an open invitation to talk to the council about finances, the meeting was the first in a series to solicit discussion about the city’s financial crisis.

Beginning with the repercussions of the previous Tuesday’s fracking information meeting, Councilman Jeff Cooper put forth a request for a resolution to ban fracking in Culver City. “There is just too much outside of any regulation, outside of the clean air and clean water act(s) , there are too many unknowns. I’d like us to develop a resolution to ban fracking, and get that to the governor, and the Los Angeles County Supervisors, and DOGGR and prevail upon them. I would love to see us draft that resolution.”

Quick agreement from the rest of the council put the item on the agenda for July 2.

Suzanne De Benedittis spoke from the podium on fracking. “I’m here speaking for many people – not just here in Culver City- to let you know that July 28 will be a national anti- fracking day. More than 140 other municipalities in the state and country will be committed, and we need to stand with them.”

Michelle Weiner was also in agreement during her turn at the podium.”I think a ban is really important even if it’s our small portion [of the Baldwin Hills oil field]. Even if it’s a symbolic gesture. When it comes to the oil field, its our turf and we need to take the lead.”

With everyone in accord on fracking, the meeting turned to the only action item on the agenda – asking for input on the financial crisis.

The staff report, delivered in a laconic tone by CFO Jeff Muir,  could have been heard as acceptance or surrender. “There may be a perception out there that not much has changed, but these are the facts of how the city has shifted over the last four years. Seventy-eight positions have been eliminated by the city, a  17.4 % reduction in staff.”

Continuing with data showing that the the 2012 budget borrowed $5 million from the emergency funds, the 2013 budget borrows $7 million, the story of financial crisis was clear.  To cover the prospective $8 million deficit, suggestions were made by every city department as to how they might make further cuts. The offers of deeper cuts from  ranged from cancelling the afterschool programs hosted by parks and rec to taking out an engine company and leaving 1/3 of the city without nearby firefighting equipment.

The proposal of a half-cent local sales tax to be added to the November ballot is being explored, and a phone poll conducted by FM3 Public Opinion Research & Strategy firm presented at the previous council meeting held that there was support for such a measure.

City Manager John Nachbar reinforced that if the tax were to qualify for the November ballot, it would have to be agreed to unanimously by the council and voted in by a two-thirds majority.

“Obviously,” Muir noted “the status quo cannot be maintained without new sources of revenue and/or more cuts. There are over 100 cites in California that have a local sales tax, including  Santa Monica and Inglewood.”

The evening was then turned over to the citizens.

Paul Ehrlich spoke at length about his ideas, holding that “There is another $2 million deficit that is not noted on the budget. This budget is horrible. You don’t help persuade people who will want to vote against the (proposed local sales) tax. You need to have a contingency plan.”

Ehrlich expanded, “The proper approach is to prioritize and not just have the $8 million dollars spread equally. Why should buses – which are an enterprise zone – compare with the police, who have monstrously high over-time? Compare the net income of police in Culver City and  Los Angeles to see where we stand on overtime and how it is in comparison.”

Karen Kurosawa held that a half a cent was not enough. “I am a resident and small business owner, and I love this city, because I love the life that I have in this city. I’m afraid we are selling ourselves short.  If a half a cent tax is only going to allow us to preserve  current levels of service- with allt he cuts we have already made- maybe we should ask for 2/3rds of a cent. I’m not willing to let go of anything else beyond where we have gone.”

Editor’s Note – The next ‘Community Dialogue on City Finances” will be held at El Rincon Elementary School on June 23 at 10 a.m.