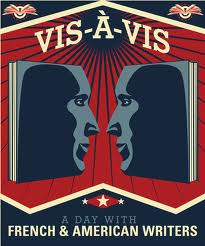 It was an evening to relish Culver City’s international reputation in the arts. The French Consulate’s gift of “Vis a Vis,”  a series of events focused on language, got it’s kick-start at City Hall on May 18 with a presentation by two “slam poets” Micheal Cirelli and Rouda.

Delightfully moderated by Dominic Thomas, who was not only multi-lingual but had the good sport to mock his own British accent, the evening had it’s bright moments and darker interludes.

It was, to begin, a challenge to the audience. If you spoke both American English and French, you were in the best possible place to enjoy it all. Those who only had one language at their disposal may have felt excluded from sections. (My own French is quite rusty, but still serviceable, so I was well equipped. I don’t speak it with any alacrity any more, but I listen well. )  If you attended in the spirit of poetry, it all worked.

However, as a writer with a great deal of published poetry and many readings, workshops and festivals under my own belt, I am not forgiving of flaws in performances of this nature.

I was disappointed in Michael Cirelli. Although he may have solid academic standing and several freshly published collections, his work seemed to me very slight. The need for American English to catch his up-to-date slang may have left a few wondering where they missed the connection. Anytime I hear a poet change his speaking voice into a reciting voice at the opening of each poem, part of me just leaves the room. Reading poetry does not require shouting. Some charming observations on women and race relations, but his reliance on one carrying line at the end of each poem felt cheap and limiting.

Rouda, the French rapper, rocked the house. While the always-prepared Cultural Affairs staff had some of Rouda’s work translated into English, his offering were so alive and aflame, he really didn’t need the support. He brought the audience in right away with a call-and-response; “when I say ‘slam,’  you say ‘souvage” and that let even the non-French speaking members of the crowd feel that they were in center with him. His “news reports” accompanied by music through a laptop were witty and crisp, satiric observations on how we ingest media. Rouda’s poem translated as ‘Whiskey Neat: Straight Up, No Ice’ was gorgeously delivered as ‘Whiskey Sec – Sans Glascon’ to an audience that seemed to connect with every syllable about lost love and longing.

One last critique that is not a critique –  there was some confusion in the billing of “slam poets” and those who expected a slam did not get what they came for. I am of the belief that a “poetry slam” makes as much sense as a meditation contest; whoever achieves nirvana first, wins. However, if you get to nirvana last, it’s still nirvana. Poetry, whether it’s about women with dreadlocks or the fluidity of language itself, is always worth showing up for.

Huge applause to Cultural Affairs for hosting the evening. It was a great challenge and a very worthwhile stretch. Anytime we have poetry in any language at all, I’ll be there.