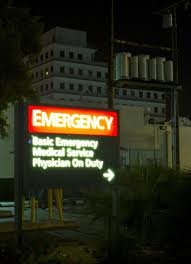 Despite it’s status as the fourth largest private hospital in Los Angeles County, Brotman Medical Center has not had a stellar reputation for the past several years. Tales of long waits at the Emergency Room, poor management and poor care have plagued the Culver City health center for far too long.

On Wednesday, May 16, Brotman invited the community to hear about how they are changing things, and what has already improved. While some seem obvious, such as moving from paper charts to electronic charts to speed patient care, other points were highlighted by enthusiastic staff. What has changed, and is it enough ?

Dr. Stephen Carney M.D., the managing partner and physician in charge of the ER program offered a power point presentation and a number of stories about his time in ER – more than 30 years- and that the problems that have affected care at Brotman are problems he has seen at other hospitals as well.

Citing his three standards for care – quality, compassion and efficiency – Carney noted that keeping nurses and doctors focused on all three was the challenge. “While I might have a doctor who provided quality care with real compassion, the amount of time it takes to get from a patient walking into the ER to having that same patient walking out is just as important.”

He noted that the electronic charts had cut admissions time by an average of 50%, and that each doctor on ER rotation now received a monthly chart of the time they spent on each case. The statistics presented which covered the time from April to December of 2011, showed a steady improvement, and the amount of time that patients spent in the ER showed a decrease from 2009 to 2012.

The next speaker was Dr. Ian Armstrong M.D., the founder and CEO of the Southern California Spinal Institute, who spoke to the same issues of commitment to the community and quality of care. Noting that “Brotman was the first hospital in the nation to implant stem cells for spinal treatment. That is something we are very proud of, and we are looking forward to being part of more front line health care in the future.”

Armstrong concluded, “We are excited to be a part of [Brotman] with new leaders to change Brotman’s postion in the community. We have the staff, we have the doctors, and we will be right up there with the Cedars-Sinai,  UCLA and St. John’s as an [outstanding] private hospital.”

Editor’s Note – What has been your experience with Brotman ? How recently have you been there ? What do you issues think they should address to improve ?