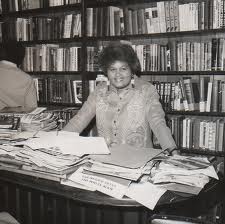 Where do you find a world-changing librarian on television? KCET featured an article on its website written by Las Angelenas of LA History entitled “12 Librarians Who Made or Saved Los Angeles History.” Our own Dr. Mayme A. Clayton was recognized in the article as one of the distinguished 12 librarians featured in the article.

Here is the excerpt-

One favorite academic librarian was Mayme A. Clayton, who like Miriam Matthews, collected Black Americana. She began her library career at USC’s Doheny Library and later worked as a law librarian at UCLA. While at UCLA, she was a consultant and founding member of the Afro-American Studies Center Library. Along the way, Clayton combed flea markets and used-book stores to assemble her collection, which is said to rival that of the New York Public Library’s Schomburg Center. When asked what motivated her, she replied, “I wanted to be sure that children would know that black people have done great things and at the time I didn’t see anyone else saving the history.” Clayton’s personal collection is now housed in the Mayme A. Clayton Library & Museum in Culver City. It includes 30,000 rare and out-of-print books, films, records and sheet music, and photographs and memorabilia.