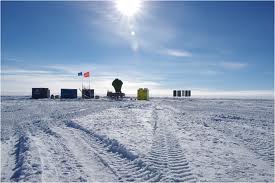 ANTARCTIC ASTRONOMY – A team of scientists representing several international institutions, including Texas A&M University, has succeeded in installing the first of three Antarctic Survey Telescopes (AST3-1) at the Chinese Kunlun Station at Dome Argus, the highest point of the Antarctic Plateau.

The telescope is the first of three half-meter devices to be installed at PLATeau Observatory (PLATO-A), a fully robotic observatory established at the “Dome A” location in 2008 and intended to reveal new insights into the Universe once possible only from space. In combination, the three telescopes are expected to find planets around other stars the size of Earth, as well as hundreds of supernovas useful for cosmological studies.

Texas A&M is joined in the international project by the Chinese Center for Antarctic Astronomy (CCAA) and the University of New South Wales (UNSW), which built PLATO-A and the control computers responsible for its autonomous operation. Dr. Lifan Wang, associate professor of physics and astronomy at Texas A&M, serves as director of the CCAA.

“This is an astounding achievement,” says Prof. Michael Ashley, head of the UNSW team responsible for PLATO-A. “A stand-alone telescope in the pristine environment of Antarctica can conduct scientific research that would otherwise only be possible from space—but at a few percent of the cost.”

Among its many unprecedented features, the AST3-1 is equipped with a charge-coupled device (CCD) camera that is 110 megapixels in size—the largest single-piece detector in use in astronomy today. The telescope will be used to search for planets around stars other than the Sun, enabling the continuous monitoring of hundreds of millions of stars in the Milky Way Galaxy, Wang explains.

“The ability to monitor stars during the dark austral winter makes AST3-1 a unique facility for astronomical studies,” Wang adds.

Ashley says the autonomous observatory is accompanied by an onsite computing system that analyzes the massive amount of data from the CCD camera in real-time to catch transient events, such as supernova explosions and gamma-ray-burst afterglows.

In addition, the telescope can be used for observations of the optical afterglows of gamma-ray bursts, which are important in early detection of supernovas as well as in timely data collection and measurement.

“We are able to process the data from each exposure within two minutes after they are taken to promptly alert the science team when a new supernova occurs,” says Prof. Zhaohui Shang of the National Astronomical Observatory of China and Tianjin Normal University.

Wang says the AST3-1 telescope is fully steerable, meaning it is capable of pointing to any sky area visible from Dome A—a huge technological leap in comparison to CSTAR, an array of four 14.5-centimeter telescopes installed in 2008, which had no moving parts.

“The observatory has to withstand the most extreme conditions on Earth,” says Prof. Xiangqun Cui of the Nanjing Institute of Astronomical Optics Technology (NIAOT). “The winter temperature can be as low as minus 80 degrees Celsius, and the air pressure is barely half that of sea level.”