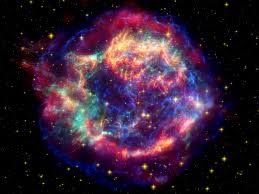 The British musical group “Zinta & The Zoots” recently gave a most unusual concert at Canterbury College, England. Joining the band for the live performance was an enigmatic musical contributor, whose part was originated some 11,000 years earlier—the supernova remnant Cassiopeia “A.”

Thanks to radio astronomer Jan van Muijlwijk and his team of astronomers and amateur radio buffs, the historic 83-foot radio telescope at Dwingeloo in Holland was pointed at Cas A, a powerful source of radio-frequency emissions in the constellation Cassiopeia, in order to relay the live signal to the stage in Canterbury during the performance. These electromagnetic waves, on arrival at Earth, were morphed with Zinta’s live vocal using a Vocoder, creating a synthesis of two temporally distinct sound sources, fusing human and cosmic “voices” across time and space.

Zinta & The Zoots, led by Ms. Zinta Egle, made their debut performance in Canterbury, England, in 2008. The band embodies a refreshing disregard for genre limitations and expectations. Their focus is on creating melodic, characterful, stand-alone songs and the arrangement ethos is to express each piece in a pure, inventive and authentic way using whatever comes to hand or mind. Whether it’s electric, acoustic, or electronic—from radios to harmoniums to Max/MSP—anything that makes a noise may become part of the backdrop for Zinta’s vocals.

BOUNCING MUSIC OFF THE MOON

The group recently revisited the radio dish at Dwingeloo to conduct some additional musical experiments—this time treating their song to a “moonbounce.” Zinta sang an a capella version of the song, phrase by phrase, into a hand-held radio transmitter; and this was sent to the Moon via the radio telescope dish, to be returned to Earth as an echo with a 2.5 second delay. The resulting recordings of this event are currently being developed into a new, remixed version of the song.

The Dwingeloo Radio Observatory (near Dwingeloo, m. Westerveld, in the northeastern part of The Netherlands), is a single-dish radio telescope with a diameter of 25 meters (83 feet). Construction started in 1954, and the telescope was completed in 1956. At that time it was the largest radio telescope in the world. As of the year 2000, it was no longer in operation in an official capacity, and since August 2009 it is officially a Dutch industrial heritage monument.

The C.A. Muller Radio Astronomy Station Foundation (“CAMRAS” for short) restored the telescope to working order, with the consent of ASTRON, the owner of the telescope. At the present time, manager Paul Boven (JIVE, CAMRAS) and teams of radio amateurs and amateur astronomers use the Dwingeloo telescope for a variety of projects, one being EME (communications). EME, also known as “moonbounce,” allows people on different parts of Earth to communicate via the Moon. In this technique, radio wave signals are aimed at the Moon by one location, bounce off the Moon’s surface, and detected by an antenna at a different location on Earth.

For more information about the band, Zinta & The Zoots:
zintaandthezoots.com