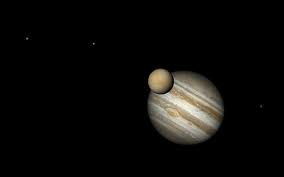 VENUS AND JUPITER DANCE AT DUSK – For the past month the two brightest planets, Venus and Jupiter, have been an eye-catching duo in the western sky after sunset. Week by week they’ve been gradually sliding closer together, and their celestial performance has just culminated.

By March 9th these dazzling evening “stars” were less than 5 degrees apart, about the width of three fingers at arm’s length. Then, from March 12th to 14th, the gap between them closed to just 3 degrees as they passed one another in the evening sky. The pairing of these bright lights is dramatic, though not especially rare.

Venus is the brighter one, for three reasons. First, it’s close to the Sun, as planets go, basking in sunlight twice as bright as we receive on Earth and about 50 times more intense than the sunlight that reaches distant Jupiter. Second, it’s almost seven times closer to Earth. And, its cloudy atmosphere is slightly whiter than Jupiter’s, reflecting a little more of the sunlight that strikes it. These advantages combine to make Venus appear seven times brighter than Jupiter.

However, Jupiter is the far larger planet, and despite being 522 million miles away (versus 76 million for Venus) right now, it appears about twice as wide as Venus through a backyard telescope.

After March 14th, Jupiter continues to slide down closer to the Sun. By mid-April it will be too low to see after sunset, lost in the bright twilight. Venus, however, appears to edge a bit higher each night. It shines well over 40 degrees above the horizon at sunset for most of the United States—about as high in the evening sky as it can ever get—and lingers in the sky after sunset for 4 hours through mid-April.

This month’s celestial show has a second act! Before the end of March, the new crescent Moon will enter the western sky after sunset, adding to the spectacle. The delicately thin crescent appears close to Jupiter at nightfall on March 25th (especially so for eastern North America). The next night the Moon will be higher, paired now with Venus.