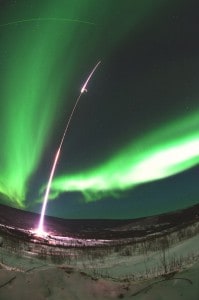 As the brilliant colors of the aurora borealis, or northern lights, delight skygazers, researchers are discovering how they affect GPS satellite signals here on Earth.

The project—the Magnetosphere-Ionosphere Coupling in the Alfvén resonator (MICA) mission—involves 60 scientists, engineers, technicians, and graduate students from several institutions and NASA. Researchers from Dartmouth College, the University of New Hampshire, the University of Oslo (Norway), Southwest Research Institute, and the University of Alaska Fairbanks also are making significant contributions to the mission.

“We’re investigating what’s called space weather,” said Powell, who has been stationed at the rocket launch site, 30 miles north of Fairbanks, since the end of January. “Space weather is caused by the charged particles that come from the Sun and interact with the Earth’s magnetic field. We don’t directly feel those effects as humans, but our electronic systems do.”

These include global positioning systems (GPS). One of the scientists’ main goals is to investigate the effects of space weather on GPS satellites.

The rocket is a 46-foot Terrier-Black Brant model that was sent arcing through the aurora 217 miles above Earth, sending a stream of real-time data back before landing 200 miles downrange. Instruments on board sampled electrons in the upper atmosphere that are affected by a form of electromagnetic energy called Alfvén waves. These waves are thought to be a key driver of “discrete” aurora—the typical, well defined and famously shimmering lights that stretch across the horizon.

The rocket payload separated into two parts once launched. One extended antennas to measure electric fields generated by the aurora. Other antennas and sensors measured electrons and ions interacting with the Earth’s magnetic field. In this period of high Sun activity, called solar maximum, gases from the Sun are likely interfering with GPS transmissions, satellite Internet and other signals.

“We are becoming more dependent on these signals,” Powell said. “This will help us better understand how satellite signals get degraded by space weather and how we can mitigate those effects in new and improved GPS receivers.”

The precision measurements from the rocket’s instruments will also shed new light on the physical processes that create the northern lights and further our understanding of the complex Sun-Earth connection.

According to Marc Lessard, an associate professor at the University of New Hampshire Institute for the Study of Earth, Oceans, and Space (EOS) and Department of Physics, the “Alfvén resonator” is a structure in the ionosphere that acts like a guitar string when “plucked” by energy delivered by the solar wind to Earth’s magnetosphere high above.

“The ionosphere, some 62 miles up, is one end of the guitar string and there’s another structure over a thousand miles up in space that is the other end of the string,” Lessard said. “When it gets plucked by incoming energy we can get a fundamental frequency and other ‘harmonics’ along the background magnetic field sitting above the ionosphere.”

As for the significance of continued investigation into auroral processes, Lessard noted, “It’s all about understanding how the energy of the solar wind gets coupled to Earth’s magnetic field and eventually gets dumped into the our upper atmosphere.”