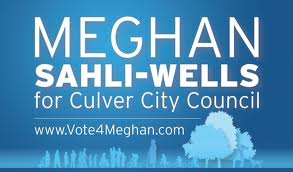 “Meghan’s strong commitment to Culver City residents and balanced approach to leadership are why I am so proud to endorse her in the 2012 election, said Holly Mitchell, who serves California’s 47th Assembly District. “Her experience in grassroots organizing is just what Culver City Council needs.”

“I know I can count on Meghan to reflect the concerns of Culver City residents on important issues facing us on the local level,” continued Mitchell. “Meghan has a track record of working with others to find solutions to problems.”

City Council member Christopher Armenta said, “In the years she has spoken before the Council, Meghan has shown herself to be a strong, consistent, advocate for Culver City residents. Her participation on several City committees has been extremely valuable, as has her leadership in local organizations and Culver City schools.”

“From development to environment to education to transportation, she has the knowledge and experience to lead our city toward a healthy future,” concluded Armenta. “It is a great pleasure for me to endorse her for City Council.”

“My platform is based on three main issues: fiscal responsibility, smart development and sustainability,” Meghan stated. “We’ve spent the last few years tightening the budget, and we don’t want to lose the services that have made Culver City such a great place to live. So what we have to do is maximize the resources that we do have.”

Meghan’s first campaign fundraiser will be held at Culver City’s La Dijonaise restaurant on Wednesday, February 1 at 7 PM. The event is $50 per person and includes a three-course meal with a dessert, beverage and glass of wine. La Dijonaise is located at 8703 Washington Blvd. Please RSVP by emailing [email protected]

Sahli-Wells was awarded “Democrat of the Year” in 2010 by the L.A. County Democratic Party, and was recognized by the National Women’s Political Caucus (L.A. Westside chapter) in 2011 as one of twelve “Remarkable Women” alongside Attorney General Kamala Harris and Assembly members Holly Mitchell and Betsy Butler. Meghan was also recently elected to serve as First Vice President of the Culver City Democratic Club.