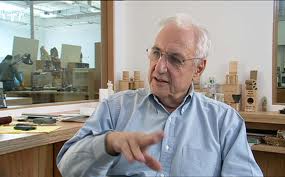 Having designed L.A.’s signature space for classical music, Frank Gehry is on board to do the same for jazz -– although his pro bono work on a new Culver City home for the Jazz Bakery would be on a much smaller scale than his downtown Walt Disney Concert Hall.

According to the Los Angeles Times, Gehry’s involvement became public Monday when the Culver City City Council authorized the city manager’s office to execute a “commitment letter” transferring a narrow slice of city-owned land next to the Kirk Douglas Theatre –- just one-seventh of an acre -– to the nonprofit Jazz Bakery for a new home.

The council had to move quickly. The fear was that if the transaction was not completed by the end of the day Tuesday the long-brewing plan to give the Jazz Bakery the land would be sunk by the state government’s decision to eliminate redevelopment agencies statewide starting Wednesday. That will include the Culver City Redevelopment Agency, which administered the property at 9814 Washington Blvd. that’s being transferred.

Richard Posell, a Jazz Bakery board member and attorney, said there’s widespread confusion over just what the new ground rules for using former redevelopment agency land might be if the transfer agreement weren’t signed by the deadline. Final details were still being negotiated late Tuesday afternoon.

“I think it’s going to get signed,” Posell said. If not, he quipped, “I hope Jerry Brown likes jazz.”

The Jazz Bakery aims to raise an estimated $10.2 million to build its new home, with a $2-million grant from the Annenberg Foundation as the campaign’s cornerstone. Plans call for a two-story building, with the main, 250-seat concert room upstairs and a small black box theater on the ground floor. The Jazz Bakery has been seeking a permanent home since 2009, when it lost its lease at the Helms Bakery complex, a mile northeast of the new location. Since then, it has produced concerts in various places.

Ruth Price, president and artistic director of the Jazz Bakery since it debuted in 1992, said Tuesday that she didn’t know Gehry, or even ask for his help, before he called about six months ago to volunteer his services.

“He said, ‘I’m doing this for two people: Sydney Pollack, and my wife, Berta.’ ” Film director Pollack, a close friend of the architect (and director of the 2006 documentary “Sketches of Frank Gehry”), died in 2008; Price said she learned that pianist Herbie Hancock had taken Gehry to shows at the Jazz Bakery, and that Gehry’s wife also enjoyed going to Jazz Bakery concerts.

Further complicating the new venue’s birth: The Center Theatre Group’s Kirk Douglas Theatre needs part of the Jazz Bakery site to remain vacant, because there’s no other place for trucks to deliver equipment and material for stage sets. The Douglas, a converted Art Deco movie theater, has no backstage work area, and CTG’s lease guarantees access to its loading door from the neighboring parcel.

“It’s critical to us,” said Edward Rada, CTG managing director. “They get that completely, and they fully intend to accommodate our needs out there and incorporate it into their plans.”

If that’s satisfied -– and the Jazz Bakery’s stages are soundproofed to keep concert volume inside -– “they would be a great neighbor,” Rada said.

“We want this to be successful,” he said, because the Jazz Bakery would add to the luster and overall drawing power of Culver City’s downtown arts scene, which also includes art galleries and the Actors’ Gang theater.

Gehry Partners didn’t respond to a request for comment Tuesday, which happened to be the opening day for the Pershing Square Signature Center, the new, three-stage complex Gehry designed for Manhattan’s Signature Theatre on 42nd Street.

In 2007, the Pasadena Playhouse announced that Gehry had donated his services for a redesign of its campus, including a new 300- to 400-seat second stage, but the plan had to be abandoned because of the economic downturn.

A business plan that’s part of a draft of the proposed land transfer agreement calls for 250 shows per year at the Jazz Bakery, with an average ticket price of $35. The organization estimates it would need to raise about $250,000 a year in donations to balance a projected annual operating budget of about $1.65 million.