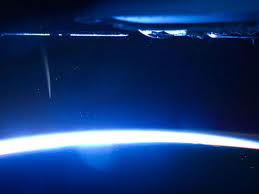 A Christmas Comet in the Southern Sky —

The recently discovered Comet Lovejoy has been captured in stunning photos and time-lapse video taken from Paranal Observatory in Chile. The comet graced the southern sky after it had unexpectedly survived a close encounter with the Sun.

This bright comet was also seen from the International Space Station in another stunning time-lapse sequence on December 21 as the crew filmed lightning on the Earth’s night side.

Comet Lovejoy has been the talk of the astronomy community over the past few weeks. It was discovered on 27 November by the Australian amateur astronomer Terry Lovejoy and was classified as a “Kreutz sungrazer,” with its orbit taking it very close to the Sun. In mid-December, the comet entered the Sun’s corona, a much-anticipated event, passing a mere 52,000 miles from the Sun’s surface. A close shave indeed….

The comet had been expected to break up and vaporize, but instead it survived its steaming hot encounter with the Sun and re-emerged a few days later, much to everyone’s surprise. It is now visible from the southern hemisphere, appearing at dawn, and features a bright tail millions of miles long, composed of dust particles that are being blown ahead of the comet by the solar wind.

Lovejoy will now continue in its highly eccentric orbit around the Sun and once again disappear into the distant Solar System. It would be interesting to know if it will actually survive to re-appear in our skies in 314 years as predicted.

Image and video of comet Lovejoy from Paranal Observatory: www.eso.org/public/news/eso1153/

International Space Station Commander Dan Burbank captured spectacular imagery of Comet Lovejoy, viewed from about 240 miles above the Earth’s horizon on Dec. 21. Burbank described the comet as “the most amazing thing I have ever seen in space.”

For a video of the comet filmed from the ISS, including live comments and a selection of individual images, go to: http://www.nasa.gov/station

FOR WATCHERS OF THE SKY, THESE ARE EXCITING DAYS. The discoveries during the past year pointing toward the possibility of life beyond the Earth encourage this writer to wonder: Will mankind finally discover a second habitable planet in 2012? And what other marvels will the New Year bring? These days are filled with enough starry wonders to make everyone who looks skyward an “astropoet.”

Speaking of which, the Pulitzer Prize–winning poet Mary Oliver writes, in her poem, MYSTERIES, YES, “Truly we live with mysteries too wonderful to be understood… / Let me keep my distance, always from those who think they have the answers. / May I keep company always with those who say, ‘Look!’ and laugh in astonishment, and bow their heads.”

To which I will add an astropoem of my own as a fond farewell to 2011:

When dry winds from the east blow down on us
And beat our ocean’s breath back out to sea,
We know December’s here: a sharp-edged month
Of golden afternoon and sudden dusk.

This beach at evening wears a desert face,
Deserted and forgotten by the crowd
Whose distant rush goes silent at the boom
And hush of water, working in the gloom.

We love these desert winds that shape our sky
Into a polished lens for seeing through,
And at some midnight hour bring into view
A star beyond the stars we thought we knew.