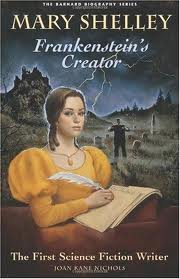 Detective work by a team of moon-struck astronomers from Texas State University–San Marcos may have finally laid to rest lingering doubts about the date when the legendary horror story Frankenstein was conceived—and about the honesty of its author, Mary Wallstonecraft Shelley.

A DARK AND STORMY NIGHT — The story begins in June 1816 at Villa Diodati overlooking Switzerland’s Lake Geneva. Here, on a dark and stormy night, Mary—only 18 at the time—attended a gathering with her fiancé Percy Bysshe Shelley, her stepsister Claire Clairmont, Lord Byron, and John Polidori. To pass the time, the group read a volume of ghost stories aloud, at which point Byron posed a challenge in which each member of the group would attempt to write such a tale.

“The chronology that’s in most books is that Byron suggested they come up with ghost stories on June 16, and by June 17 she’s writing a scary story,” Olson said. “But Mary Shelley has a very definite memory of several days passing where she couldn’t come up with an idea.”

Which account is correct? Moonlight is the key. In Mary’s account, she was unable to come up with a suitable idea until another late-night conversation—a philosophical discussion of the nature of life—that continued past the witching hour (midnight). When she finally went to bed, she experienced a terrifying waking dream in which a man attempted to bring life to a cadaverous figure via the engines of science. Mary says she awoke from the horrific vision to find moonlight streaming in through her window, and by the next day was hard at work on her story.

DOUBTING MARY SHELLEY — Although the original gathering and ghost story challenge issued by Byron is well-documented, academic scholars and researchers have questioned the accuracy of Mary Shelley’s version of events to the extent of labeling them outright fabrications. The traditionally accepted date for the ghost story challenge is June 16, based on an entry from Polidori’s diary, which indicates the entire party had gathered at Villa Diodati that night. In Polidori’s entry for June 17, he reports “The ghost-stories are begun by all but me.”

Critics have used those diary entries to argue that Mary didn’t agonize over her story for days before beginning it, but rather started within a span of hours. Others have suggested that she fabricated a romanticized version for the preface of the 1831 edition of Frankenstein solely to sell more books. Key, however, is the fact that none of Polidori’s entries make reference to Byron’s ghost story proposal.

“There is no explicit mention of a date for the ghost story suggestion in any of the primary sources—the letters, the documents, the diaries, things like that,” Olson said. “Nobody knows that date, despite the assumption that it happened on the 16th.”

FRANKENSTEIN’S MOON — Surviving letters and journals establish that Byron and Polidori arrived at Villa Diodati on June 10, narrowing the possible dates for the evening of Byron’s ghost story proposition to a June 10–16 window. To further refine the dates, Mary Shelley’s reference of moonlight on the night of her inspirational dream provided an astronomical clue for the Texas State researchers. To determine which nights in June 1816 bright moonlight could have shone through Shelley’s window after midnight, the team of Texas State researchers traveled in August 2010 to Switzerland, where Villa Diodati still stands above Lake Geneva.

The research team made extensive topographic measurements of the terrain and Villa Diodati, then combed through weather records from June 1816. They then calculated that a bright, gibbous Moon would have cleared the hillside to shine into Shelley’s bedroom window just before 2 a.m. on June 16. This calculated time is in agreement with Shelley’s “witching hour” reference. Furthermore, a Polidori diary entry backs up Shelley’s claim of a late-night philosophical “conversation about principles” of life taking place June 15. The “ghost story” proposition could have taken place several nights earlier.

“Mary Shelley wrote about moonlight shining through her window, and for 15 years I wondered if we could recreate that night,” Olson said. “We did recreate it. We see no reason to doubt her account, based on what we see in the primary sources and using the astronomical clue.”